Revenge of the Fallen Scenes Shown at ShoWest 2009

by bwbm on April 3, 2009
Several scenes from Transformers: Revenge of the Fallen were shown during the ShoWest 2009 event, where Director Michael Bay was honored with the Vanguard Award for excellence in filmmaking.

The scenes were described by Coming Soon and Ain't It Cool News, among other sites that were in attendance of the event, which helped assemble the write-up below.

The major scene that was shown during the event was a conversation between Sam and Bumblebee in the garage of the Witwicky household. Sam tells Bumblebee that he's heading off to college and that Bumblebee cannot come because Freshman aren't allowed to take vehicles to school. Plus, he doesn't need protection anymore [how wrong is he? -ed].

Throughout the scene, we find that Bumblebee is, once again, struggling with his speaker box and returns to using the radio to communicate. When he learns that he cannot come, Bumblebee sprays windshield washer fluid to simulate his sadness.

As Bumblebee and Sam speak inside the garage of an under-repair Witwicky household, Mikaela is outside waiting and changes into a dress of what Coming Soon describes as a wedding dress-like design, and a bouquet of purple flowers.

As for the house being under repair, AICN speculates it could stem from an attack that may happen earlier in the scene. We were provided a look of the said attack in the full teaser trailer.

After that scene wraps up, a quick montage of action sequences are shown. One involves an extended look at a daylight battle scene between Devastator and Optimus Prime that we saw during the Super Bowl spot, and what seems at another angle.

In this version, the camera captures the action from afar, and when Optimus Prime is punched, he sails towards us, hits the ground, and rolls to a stop in front of the camera, and spits something out. This is most likely another fragment that we saw flying out when he first got hit (see screen below). 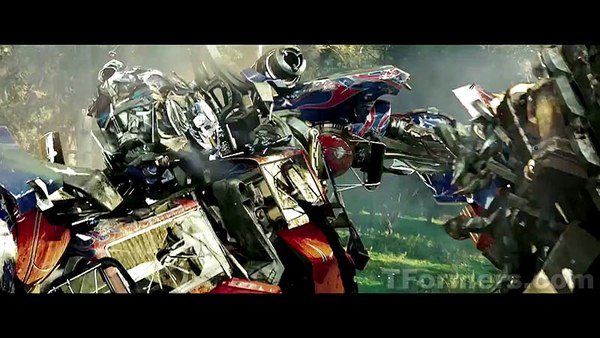 That has got to hurt

Other scenes include explosions [of course -ed], giant robot with saw blades cutting a car in half, and a mechanical bug being forced into Sam's mouth [that's really gross -ed].

Thanks for TFormers Community members "johnDoe4880" and "Sabres Fan" for the finds!