Customs of the Week - Revenge of the Fallen Coneheads by Alphamagnus

by Garage Mod on September 1, 2009
Revenge of the Fallen has captured fans hearts with some really interesting new takes on action figures and characters from the Movie universe. With no sub-factions in the movie. It is really awesome to see someone's filled the gap by making a custom group of Coneheads. Thanks to Alphamagnus's customs, for such job we have chosen them as the Customs of the Week! 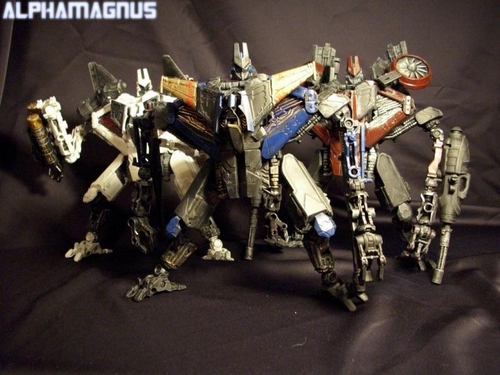 After The Fallen hears of Megatron's demise he launches an ALL OUT WAR on the Autobots. This time not relying on faith to seal Optimus Prime's fate, but GREED.

The Coneheads are one-track-minded as all Seekers all, but unlike Starscream it isn't POWER that fuels their lust. 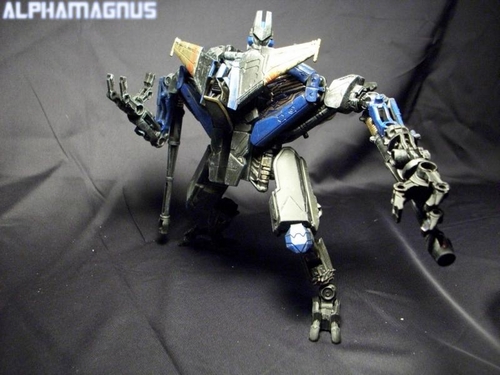 Dirge exists solely to speed past his rivals, refusing to be slowed down by targeting he will shoot to kill at the first sign of a conflict. The only reason he took this job was to hunt down the faster Autobots, to use their parts to upgrade his landing gear, to be faster on land as well.

He would rather do a fly-by and nail his pray with a point-blank shot to the face than bother with an aerial campaign, as he would have to slow down to get a lock on his target.

Using the TFTM '07 Starscream I replaced the head with a balljointed E.mirage(dreadwing) head and using various Neoshifter mods (credit Crefigz) I replaced both arms and gave him new ankles, for better pose-ability.

Dirge in particular got his cannons from a random junker bot, and his winglets are actually just relocated from the back of the SS mold. The nose cone wings are from Universe SS. he was primed with Krylon Fusion camouflage , and detailed with Testors enamels.

Ramjet is the self-appointed leader of the coneheads. His superiority complex dwarfs all other decepticons, seeing every Autobot as a mark he must hit. Although he has been promised absorbent amounts of wealth and power, he wants nothing more than to have Optimus Primes head on his mantle. A trophy no other decepticon could challenge. 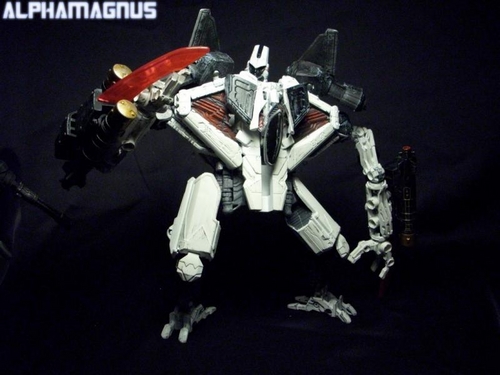 A warrior that believes in hitting his target, not showering the landscape with shrapnel. Ramjet carries only 4 missiles, as that is all he should need to take out his prey. Not being a fool and attacking too many targets at once, he gets a solid lock before firing. If all else fails he has his energy blades which protrude from his missile launchers, in case things get too close for comfort.

Using the TFTM '07 Starscream I replaced the head with a balljointed E.mirage(dreadwing) head and using various Neoshifter mods . I replaced both arms and gave him new ankles, for better pose-ability.

I don't know what figure it was from but Ramjet's wing engines were actually once a gun. Missile launchers are from Animated Leader Bulkhead. His swords are from Animated 2-pack megs, with some flashlight LEDs to give it some light.

Thrust has a thing for being one step ahead of all Cybertronians if it isn't having the next great weapon , he's constantly finding new ways to be modified by "the DR." whether it be for maneuverability or just the thrill of being modified. Thrust is a sicko, sometimes he relishes being torn apart in battle, just for the sweet fact he might need an upgrade to function. 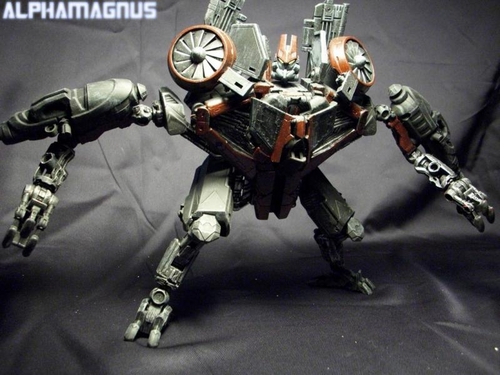 Breaking from the pack he prefers to boast his might and show off to scare his opponents. Although his modifications make him better than the rest, he seldom fights one opponent directly, just in case he loses it would have to be from a group attack.

Using the TFTM '07 Starscream I replaced the head with a balljointed E.mirage(dreadwing) head and using various Neoshifter mods . I replaced both arms and gave him new ankles, for better pose-ability.

Thrust had a few parts here and there added, but the biggest help was from Beast wars TM megs' VTOLs the guns are from a neoshifter with the gatlin ends pinned on.

Want to see your Transformers custom featured on TFormers Custom of the Week? Just post your custom gallery to Transformers Garage. If we think yours is the best one of the week, we will feature it on the TFormers.com home page for all to see.
8 Image(s) - Click to Enlarge 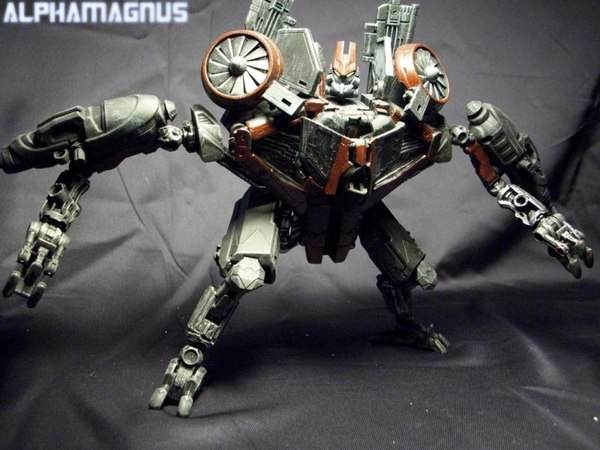 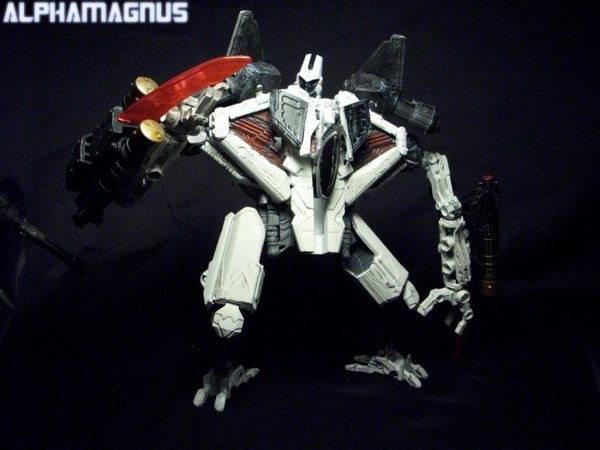 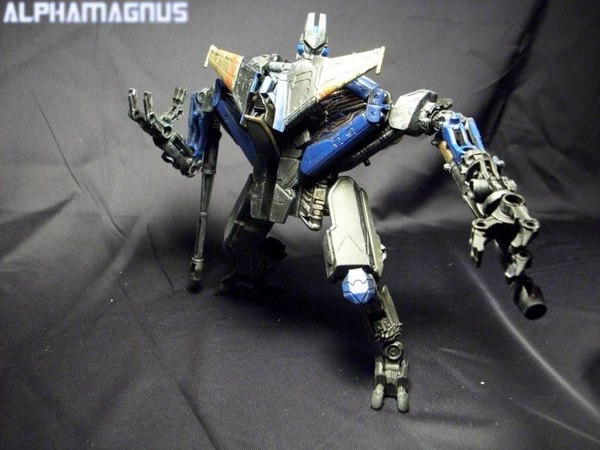 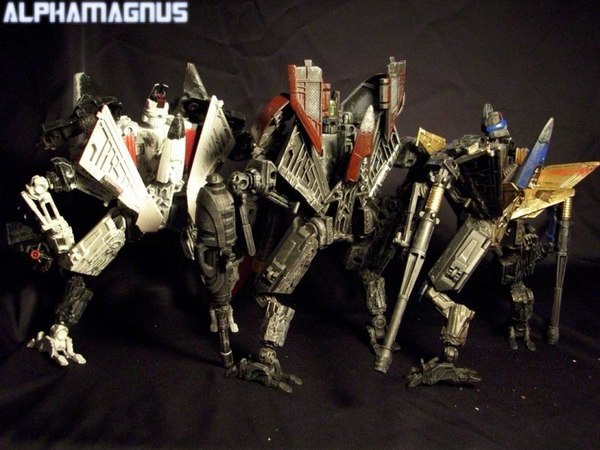 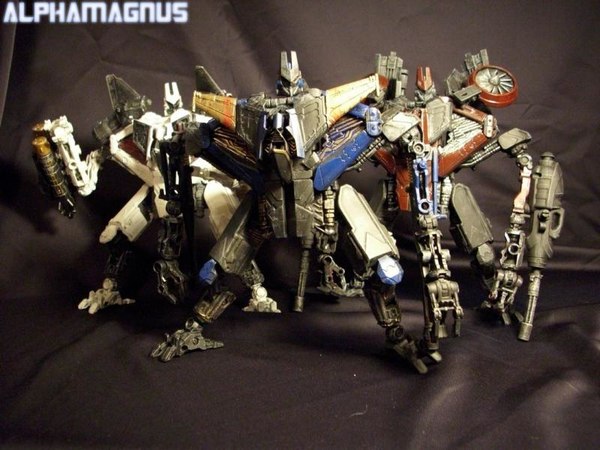 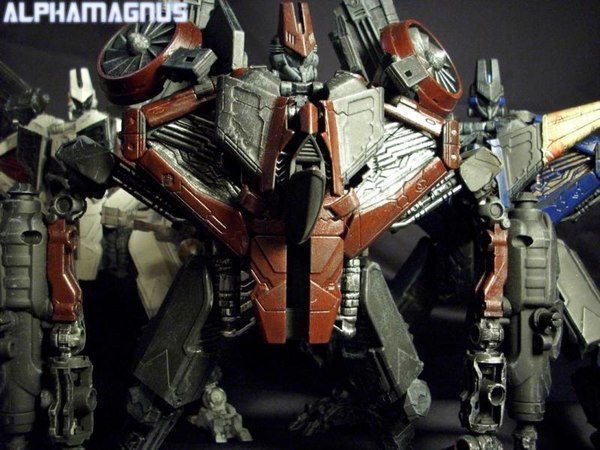 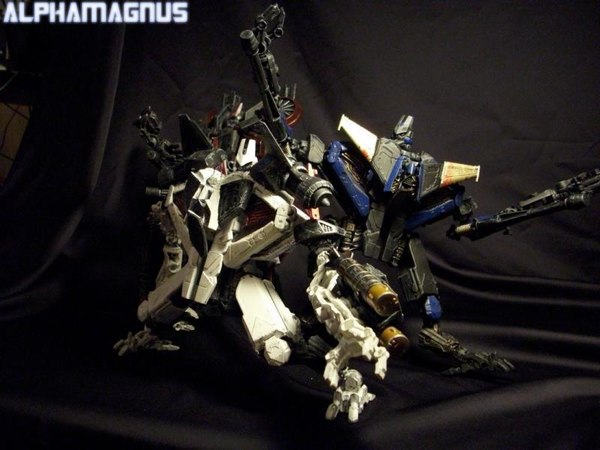 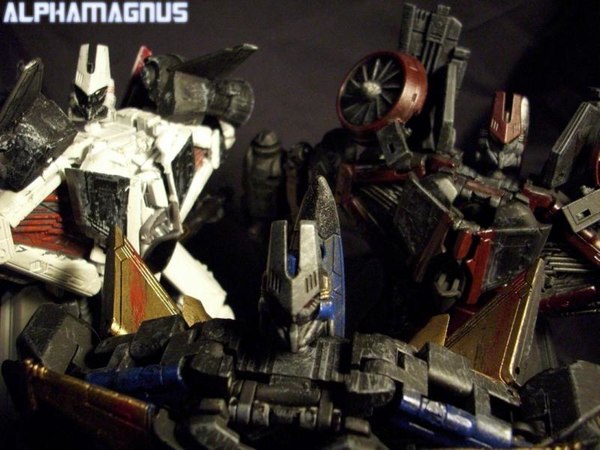