by bwbm on June 26, 2010
We are live at the BotCon 2010 Hasbro Studios Panel. We will be giving you a minute-by-minute account of the events going on here, so be sure to tune in! Panel has ended. Check out the full report now after the jump. 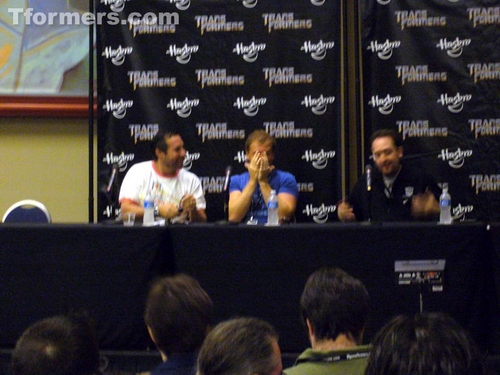 It was just announced that we will be talking about Transformers: Prime today!

Some guy, a.k.a. Aaron Archer

Kline - In the case of Transformers, Alex Kurtzman and Roberto Orci are very involved. This draws a lot of their love of the Transformers and allows them to explore the characters and who these bots are and what their relationships are, their weaknesses, strength.

26 episodes are currently being planned for the first season.

10:17 AM: Archer - We've done a lot of things that allow us to better understand the Transformers than a decade ago. We are very excited for what will come.

10:21: Autobots have been living on Earth for a while and stayed behind once the Decepticons have left.

They have stayed because Cybertron is a husk. The Autobots are trying to get home or somewhere else.

Kline reveals it's a spoiler.


10:22: The character will be revealed slowly throughout the series as the Decepticons begin to reveal themselves.

Fogel: If it's your first time, you're really going to get to know them

Kline: Because we couldn't think of any other name?

Fogel: Right now, as animation is being done, we are in our last few scripts and one of the things in the series is what it means to be a Prime.

Archer: We've been trying to make Prime stand for what it should and they've taken to that concept and run with it. It's going to be symbolic once it has been said and done.

Kline: Bit of a production crunch, so what we are seeing today are not CG models. We'll be lucky to have them in the show.

Kline: We will see some conceptual art and trying as desperately as possible to be as epic as we can.

Kline: It's much better than this, he jokes.

Cullen: "Reuniting with Welker and Megatron and hearing his voice in the same studio, sometimes I have to control myself from breaking up. It literally spawns a lot of memories from the past. Coming back from all these years, we began to reminisce on crazy times."

Welker: I will bring Megatron down a little bit, instead of "up here!" (uses G1 Megatron voice).

Welker: Honor of working will Cullen for a long time and giving as a human being and a friend.

Cullen: "Fasten your seat belt kids, it'll be a ride."

Video: A little bit of an in-studio video of Cullen and Welker playing their role in a scene.

Archer: We're all in for a ride and it's great to be able to put these things together.

Kline: those two working together is great because they love each other so much.

Video: The video showed off the Prime and Megatron design. It molds Movie and G1 Prime with the slenderness of Animated, "he's been working on his delts."

Video: Megatron, again, is a movie and G1 look. He has a purple-colored canon on his right hand and the bucket head is back!

10:34 - "So what the heck does Megatron turn into?" Fogel: Megatron is a jet in the show. However, one of the things I liked during the early designs, is that Megatron is not an Earth vehicle, so he has a very space-age jet.

Where will it air in Canada? Not sure. It will be handled by international syndicators

10:35 - Q: Animation in general, what is the thought being the format of 26 episodes?
Kline: In the past, 13 eps during hand-drawn times are harder and they don't exist anymore.

In CG, it's more expensive to develop a CG character and just use it for 13 episodes and makes for sense to market it over 26 episodes. It is typically minimum for CG shows.

10:36 - Archer: The Animated team is different and we put a lot of things in there we wanted to see. However, we are working on G1 and that has been our focus.

10:37 - Kline and Fogel say that they are planning for a multi-season show, so there may be a possibility of them calling out to other shows.

10:38 - Will this show be available in the U.S. other than The Hub? Archer says it's not right for this panel, but Kline says he'd like people to see it.

What other voice actors are on the show? Klinel: Can we blow it? Fogel: Sure. Archer puts the kibosh on the reveal, though. He says that they will formally be revealed as the time is right.

10:40 - Will the show launch with the network? They are not sure. They have the obligation to deliver episodes, but The Hub chooses when to air them.

10:41 - Will this be a continuity of Animated or any other shows? Archer: This will be a modern version. Instead of harkening back to 25 year old things, they will bring new things. Kline: Archer has found a way to tie all of the mythologies together. Kline and Fogel joke that Archer brought "the book," which has everything. They joke that all Tfs have astrological signs.

10:42 - It feels like you're going for a long term feel. How long are you planning on this to go? Kline - not sure and it depends on how many people watch it. But we can tell you that writers have crafted lines up to year four. Fogel: We plan on going to from infinity and beyond! (gesture towards Disney World)

10:43 - Any recurring human characters? Kline - We're on Earth, there will be humans. They may come back a couple of times. Archer: Because they're on Earth, there are humans, but the Atuobots are the focus here. Fogel: This is a bot-centric show.

10:45 - Another video, First up, they reveal Bumblebee which we have seen before. He will transform into a extremely modded about Camaro. With an engine lock spilling out of the hood. With large wheels filling out the wheel wells.

Prime will Transform into a Mac Truck - NO FLAMES.

Megatron has a chest similar to Animated. Kind of like the movie, but easier. Not as convoluted.

They joke that Cullen turns into Betty White and Welker turns into Slimer.

10:48 - Kline - All designed with the United States and they are in control of everything.

10:49 - Will we see various forms of various characters? Yes, maybe. We will see different versions of different characters. Archer - cannot talk about it. We have some surprises left. Kline: A vehicle. Archer hints that it's something similar.

Kline - they are building the vehicle, bot, and full transformation. You will see those pieces move and you will see sort of what they turn into.

10:50 - Will Arcee be a humanoid mode? Or will she be multi-vehicles? No, she will be by herself.

Cliffjumper will finally get his own life and love.

Susan Blu will be voice directing the show. 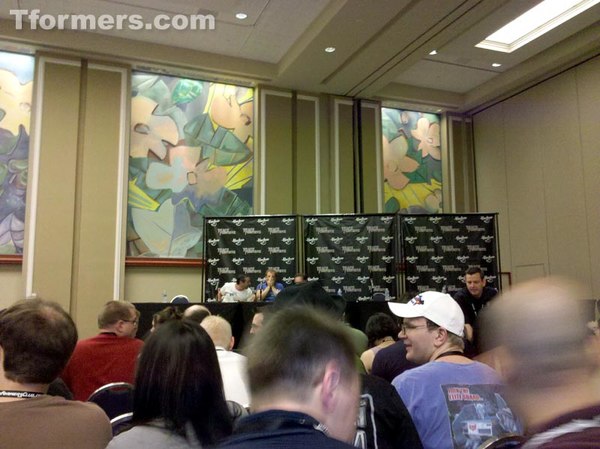 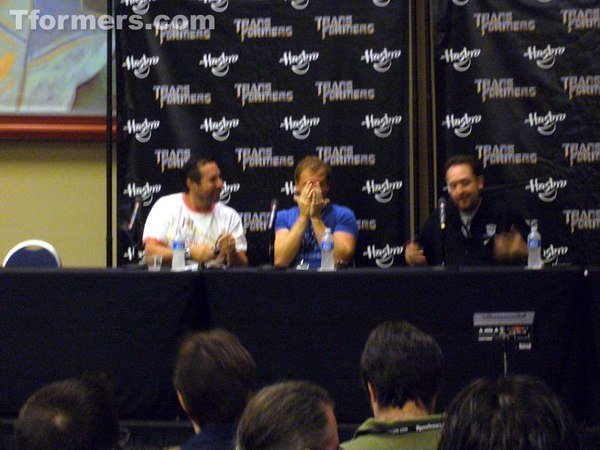