by BaCon on July 25, 2006
TFormers.com caught up with Mark Boudreux, a 30-year veteran designer of boys toys at Hasbro about the expansion of the Titanium line into Transformers. Mark gives us the story on the newest Transformers line that was originally started as a Star Wars line. Titanium produces 3" and 6" figures that complement the main Transformers toy line. Its no surprise that key to the new line's success is its partnership with Don Figueroa, best known as the artist for Transformer comics by IDW. Read on for all the details on these exciting new Transformers. 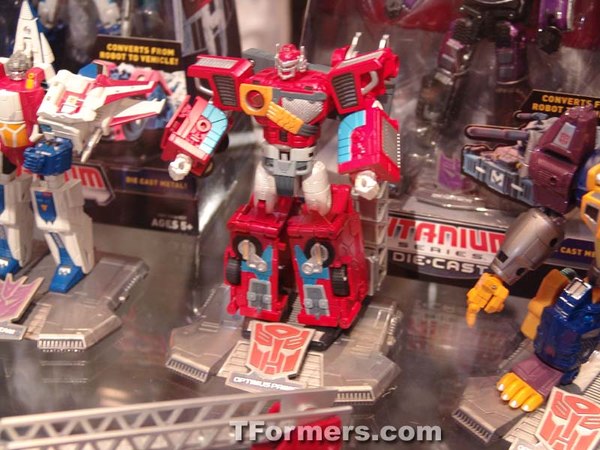 TFormers: How did the Transformers Titanium line get started?

Mark: We started the Titanium line with the 3-inch vehicles. That was very popular. We took a look at the Die-cast segment and we also took a look at the portfolio that we had at Hasbro. And certain things came to mind that would be appropriate for die-cast. Obviously Star Wars vehicles is one, we've started to get into the Star Wars figures as well. But certainly, Transformers was at the top of the list that would be a perfect translation into die-cast. We worked with the main Transformers designers to determine what would be the best set of figures to develop that would compliment the main line the Transformers team was doing. We also were using Don, one of the stock Artistz for the main line Transformers, he is working directly with us to develop the new designs.

Mark: Yes. And so as we've been working. We set our parameters. We said the figures would be approximately 6-inches tall. We would like a certain level of articulation. Because we do have a size to work with, a certain package dimension and thers is a cost that we need to work within as well. So Don set forth to develop new designs. Designs are exclusive to Titanium. 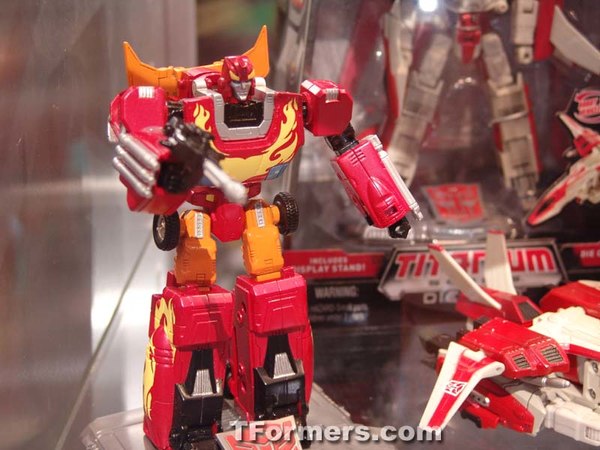 So we said to Don. "We'd like to do Rodimus Prime. Design what you feel would be a really nice updated version of Rodimus Prime that would fit our parameters for this line in Titanium." And that's exactly what he did for us. We told him we really want the robots to be designed as one. It would be difficult for us to a separate trailer and the tractor. So he developed designs that allowed it to be all one piece. The same thing with the rest. He's come in and developed designs for us that we've been able to translate into models. And he does a great job. He is such a talented guy. He knows what he's doing. He lives and breathes Transformers. So he's able to draw in such a way that they really can be functional. And that is really the key to the success of this.

Mark: They really do need to go from their Robot mode their vehicle mode with no hocus-pocus.

TFormers: These are all one piece or are there any snap-on parts?

Mark: There are a few pieces that you may have to remove during the transformation, but then you snap them back on. Like for instance. The wings on Jetfire. To help with the Transformation, that wing assembly un-snaps and pops off. You re-arrange the character and you pop it back in.

Mark: The goal was to have all the parts usable in both modes.

Mark: We are able to choose from any segment of the Transformers. Weather in the future, it might be Beast Machines, or G1. We're not restricted to any series at all. We can go into the comic books. We have War Within. Optimus Prime is from War Within. Thundercracker is from War Within. The Megatron is from one of the GI Joe comics.

TFormers: Ah yes, there were a lot of questions about which series Megatron was from.

Mark: Yes, it was the GI Joe series. So, we either ask Don to use his original designs and work with it or I will send him a picture and say "Don here is a picture of Thundercracker in the comic book. We'd like to do a representation of this figure in that particular time. Can you work something up for us?" 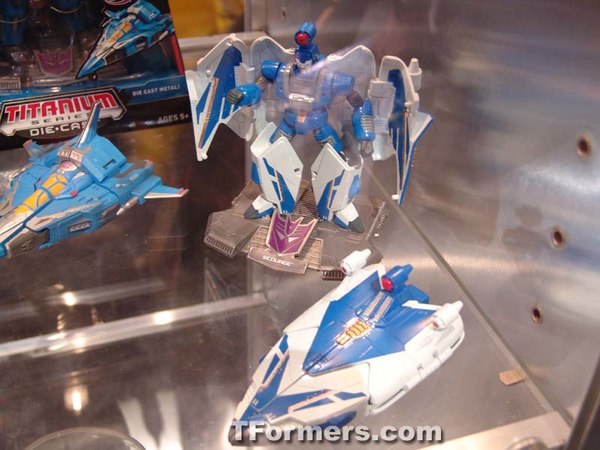 Don is a great resource for us to be able to deliver a true Transformer that is ready for us to work with. Then the challenge and the fun, has been working with the orient to develop the models. To develop all the color schemes. To work with die-cast. To work with the plastic. We are really pleased with how they've been coming out. Because we've been able to pull from any Transformers line there is. You just get a really nice variety - like a color palette.

TFormers: I am impressed. You've certainly picked not just some of the most popular characters, but some of the best incarnations of them.

Mark: Right. And again that's where we use the expertise of the main Transformers guys. They've been doing this for years. And I use their expertise quite often. I'll bounce ideas off of them. We'll talk about the designs. I think they are very happy with how these are coming out as well.

TFormers: Let me ask you. When you say "we." I am sure a lot fans assume it the main Transformers team are the ones working on these. What's your role at Hasbro? Are you focused only on the Titanium line exclusively? 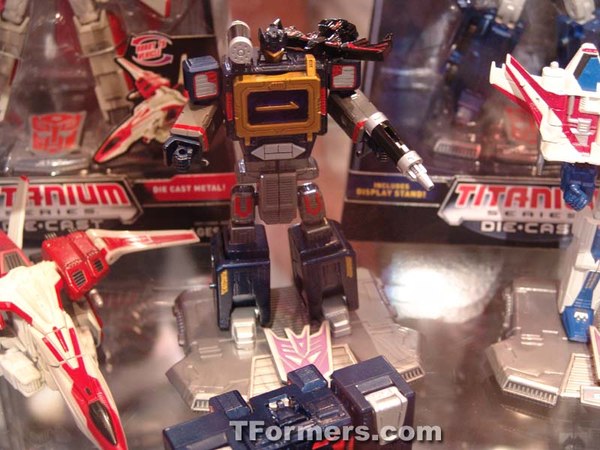 TFormers: I got to tell you. In my own opinion. You've done a great job. These are really beautiful. Not only the number of them, but the selection is fantastic. Everyone I talk to is really happy about what you're releasing. When are we going to see some of these in the stores? Are these wave 1? Wave 2?

Mark: [War Within] Optimus and [GI Joe] Megatron are the first Wave. They should be shipping now. Thundercracker and Jetfire are the second wave. Because we are showing them in production packaging, if they are not shipping now, they should be very shortly. The other models that you see here, I am still working on with the orient. What you see is what we're going to be doing. I am still fine tuning decoration and things like that. You will notice not all of the logos are on the models yet. All the models will have logos in both robot mode and vehicle mode. You'll have the proper designation for both. Let's see which waves are next... I believe it will be Rodimus and Soundwave next [Wave 3]. Then RID and Optimus Optimus I believe. The pairing for Starscream I am not sure of yet. So its at least 3 Waves that we're seeing here.

TFormers: Is there a long-term plan to keep releasing these? Or are you going to roll these out and see how it goes before we get more of them? Are there plans to do product for the movie and stuff like that in the future if there's an opportunity?

Mark: I can't speak specifically to items we might do in the future. But, we're feeling very strongly about the popularity of the 3-inch line. The Star Wars figures are starting to get out there. From what we have heard this weekend, we think the Transformers fans will like this line. We definitely want to see this line grow as a brand. 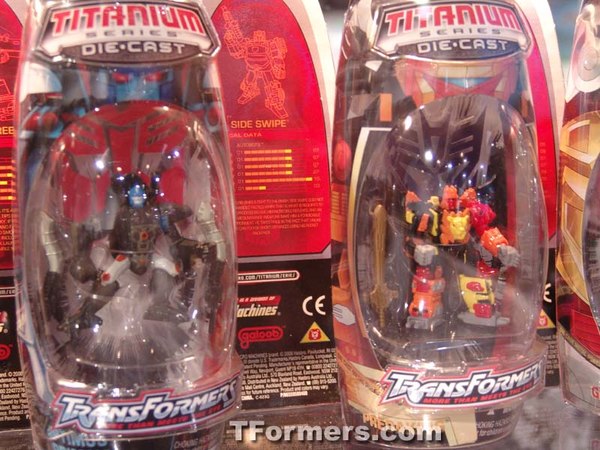 TFormers: Why are there 3-inch and 6-inch figures? Are these positioned for the younger and older fans?

Mark: Well I think with the popularity with the 3-inch Star Wars. It's a nice size and it's got a great price point. You can put a lot of them in small area. It's very easy to collect. The thinking was the same with the smaller Transformers. It's a great way to get a large variety of figures in a small scale at a nice price. Kids, this would perfect for them. But also for a sector of any age.

TFormers: I will be buying them. Heheh.

Mark: Because of using the die-cast and the plastic. The smaller size really doesn't allow for transformation. And we thought we really would like to have a transformable Transformer in the Titanium line. So that's where the 6-inch came into play.

Mark: We also worked with the main Transformers team to determine what would be the most appropriate size. Again to compliment what is being done on the main Transformers line side. So it's 6-inch when we started working on this, and saw that as a good size for detail. A good size for articulation. It would give us enough bulk with the die-cast so that everything just seemed to fit so it made a lot of sense to use that size.

TFormers: You've mentioned that the 6-Inch figures are done in co-development with Don and the main Transformers team. Are the 3-inch figurines done the by the same people? I noticed that you've chosen much more dramatic poses that you can't do with a robot toy form. 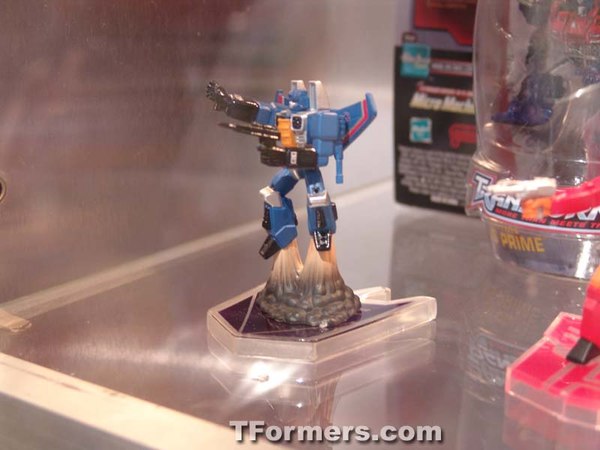 Mark: That's correct. There is another gentleman who works on the 3-inch Transformers. I am not 100% sure of all the sources he uses. But you are absolutely right, with the posing. One of the things that we're not able to do a lot of the times with the transforming ones because of the joints, a lot of the times they don't allow for that kind of flexibility.

TFormers: I want to thank you for taking the time to give us such a detailed look into the Titanium Transformers line.

Check out all of the figure on display at SDCC in the Transformers Titanium Gallery.