by BaCon on September 29, 2006
The Simon Furman Creating History Panel is now complete! Check out the information from panel question and aswers with Simon and Don Figueroa. Get updates on the comics, some of the things Simon and Don are working on, New Titaniums Sets w/ New WW Megatron and other stuff you don't want to miss. 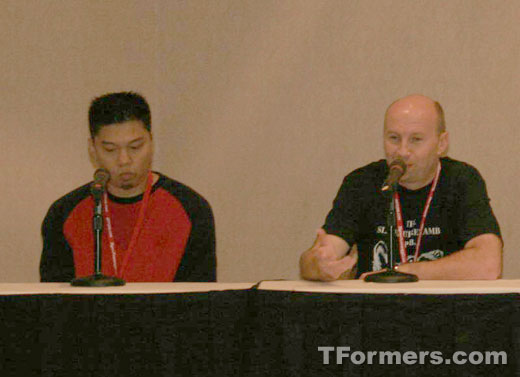 + How did you approach TF from super hero comics on the marvel run?
Furman: I didn't approach it differently. At the heart they are very similar. Went for an interesting nugget of info for that character or this character and go from there which is how he does all his writing. He looked at them as characters not robots and that's how he still does it.

+ Don anything you wish you had done differently with the designs on War Within now that toys are being made?
Don: We might re-do War within Prime with a new Megatron as a two pack. I wanted to see the joints done tighter. You will see a new Titanium's 2-pack with War Within Prime and a new WW Megatron.

+ Don, do you own the copyrights of the drawings you do?
Don: No, once submitted to the companies they own it. Sometimes he sells originals which he gets to keep. But can't print them off and sell them.

+ What kind of characters do you choose?
Furman: I will give any character a chance, but some stick out in the tech-specs or bios, like Nightbeat. I see something I like and want to write about.

+ Furman says he doesn't want to overuse Grimlock. He is in the Shockwave spotlight and won't show up again...well I can't tell you.

+ Furman says look for an IDW Galvatron to show up down the road. Other dimension stuff will be coming with the Nightbeat stuff.

+ Furman has a love for Marvel comics because he grew up reading those titles. He says Marvel is his spiritual home cause he grew up on those and working in that universe is just fabulous.

+ Simon said he would like to do something with the new Deaths Head characters.

+ About settings, Simon said he picks cities by using a big map book he owns. He tries to look at the geography and try and make it realistic to get from one place to another. He also tries to use real roads and towns in his stories.

+ Issue 2 of Escalation starts off on the hill on Capital hill and he Googled for landmarks there and then had those drawn in statues and stuff.

+ Deaths Head turning into Deaths Head 2.
Furman: It was a decision out of his hand. Originally it was a story to use the original character and a change of staff from Marvel UK and the book was canned. Furman was removed which he wasn't happy about. He didn't own the characters so he had no choice in the decision. He prefers the original version better.

+ Simon: ha vent really been able to finish your stories, cause of being cut off from publisher. How do you handle it?
Furman - really the only time was cut off was with DW. The other they were able to wrap them up. Its really a shame about the DW cause it was going great. He hopes one day they can finish them.

+ Firuman says he is pleased with the IDW deal. Because for the first time he gets to create his own story, not building from previous stories. Ground zero stuff which will be quite big and cohesive.

+ He approached Bludgeon in the IDW series the same way he did before. Don made some design changes to make him more scary.

+ Furman likes conflicted characters. He loves Grimlock. He likes characters you don't know what they are gonna do. How far will they go to achieve their goals even if it is for the good.

+ In the Ultra Magnus Spotlight he wants to see him step over the line a little bit.

+ Stuff that happens to one of the human characters in the 1st issue of Escalation will have big repercussions but knows Transformers are about the robots.

+ Furman's influence would be Stan Lee.

+ When asked if there are any plans for more female characters in IDW series:
Simon: There has to be a rational for any character he uses. Like for Pretenders, the outer shell never worked for him, but now they have a rationale for it so he is happy to use it. Females never worked for him. Why are there female robots? Until he has a reason why, he won't use them.

+ Can we get more Ratbat? Furman: No reason why we can't have a IDW version. But he wants to do a Soundwave Spotlight which we might see him in.

+ Why was the Fallen always on fire? Furman: Cause it looked good.

+ Don what is your favorite Titanium?
Don: A new G1 Ultra Magnus from truck to trailer without having to build the armor around a Op repaint when he transforms.

+ What do you think about toys based on your creations like Primus?
Furman: Its very flattering, he was the first in line to get the War Within.

+ Furman will be doing 2 projects tied to the Transformers Movie. He will hint more about them in the Sunday panel.