by Primus on September 30, 2006
Just posted is news from the Peter Cullen Voice Actor Panel. We have a number of news highlights to report. First is Cullen has signed a contract with Paramount to cover three (3) Transformers movies. So worry not, he's not going anywhere. Also there's updates about a cool poll that will let fans submit a phrase that Cullen will say in the Transformers movie - Read More 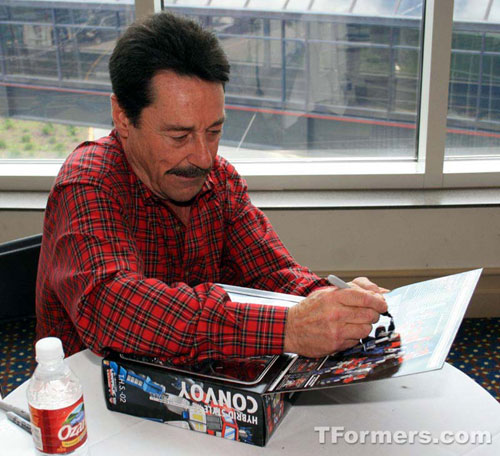 + Just in is news that Peter Cullen has signed a Movie Contract to do 3 Transformers movies with Paramount.

+ There is news that starting October 2nd, fans will be able to submit phrases that they want Optimus Prime/Peter Cullen to say in the Transformers movie. Fans can submit multiple suggestions. Then starting on October 16th, Paramount will choose 30 phrases from the fans submissions that the general public can vote on. The most popular being used in the movie.

+ Peter also mentioned that Frank Welker has auditioned for the voice of Megatron and is interested in playing the part. No confirmation was made about this. All this will be going on at the Official Transformers Movie site.

+ And lastly, Peter Cullen says he's working on a book. An auto-biography that will cover his career and experience as the voice of Optimus Prime.