by BaCon on July 19, 2008
Just in are new official images of the Transformers Universe 25th Anniversary Optimus Prime action figure. Get a look at the beefed up Generation 1 figure reissued for the 1/4 mark with accessory Autobot Shield / voice box with the voice of Peter Cullen himself, DVD pack-in and sweet gatefold packaging. Check out all the images now in the gallery.

For million of years, the only constant in the lived of the citizens of Cybertron has been change. Millions of years of war have left much of the once beautiful machine world a jumbled chaos of shattered metal and melted slag. Throughout it all, only one robot stands like a bulwark against which the tide of chaos breaks, and washes back. Optimus Prime is the greatest commander of the Autobots and the symbol of the best they have to offer - honor, compassion, justice. He is the ultimate warriors against the evil of Megatron, and the best hope Cybertron has of ever achieving peace.

He emerged like a savior from the darkest time of the war; an unknown, chosen to lead, and ganted the power and wisdom of every leader that had come before. Those before the war he been a simple archivist, the power of the Autobot Matrix of Leadership Transfigured him. He became a warrior powerful enough to oppose even the unstoppable Megatron. Motivated by the love of peace and honor he had learned in his study of the history of his world. If there is a victory to be won. It is Optimus Prime who will lead the Autobots to it.
4 Image(s) - Click to Enlarge 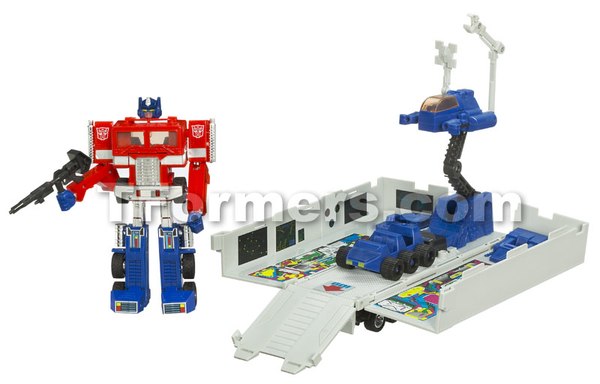 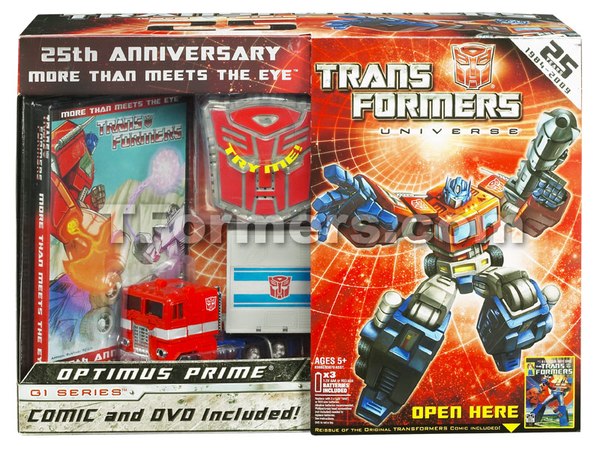 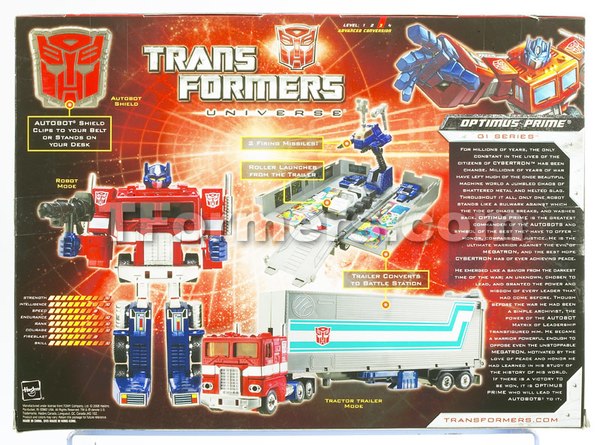 might get this depending on the final price but i still like the takara #0 bookstyle reissue the best! :thumb

I hear ya Ultra Mattus! :lol :roll its too true too true

I hate the fact that I'm totally going to buy this.

I think I could get behind plastic stacks, as long as they were painted correctly. The robot mode benefits from the long smokestacks.

just for the record, the short stacks don't look anywhere near as bad as they could (i've got a US Pepsi Prime from Mt. Dew). personally, i'm all for soft plastic stacks >_>

...and we dont REALLY know the full deal on this release OR what it will officially (officially in your hands not "official" pics) look like. I ALWAYS see fans bickering over a toy that isnt right, but quite often, when its released it looks 20 X's better. So we will see.

What im betting is he WILL have short stacks, but they wont appear as short as they do in THESE pics. If you look at the 1st "official" pics of him at BotCon, he HAS long stacks. So maybe Hasbro only had one of the old ones to take pictures of, and they MAY just give him long or longer (or shorter then the last release) stacks after all. We dont REALLY know.

I do however bet that he will not have them. But you never know, laws change, ppl in office change, and opinions change. So who knows. We can only assume

*also he might just have new scupted parts or differences. It looks like they may give him a different color scheme (G1 toon maybe?) to offer collectors something new. And essentially this IS for collectors, Aoijunni's right & its all about the Marketing strategy <(sp*) and who their merketing consumers are.

Fact is that TRU, Wal-Mart, Target, etc... carry extremely limited numbers of collector-oriented toys, if at all. For Hasbro to convince the big retailers to sell these things en mass they have to sell them as regular toys, not collectors items.

And it really isn't a collector's item. Like Hobbes said, this is aimed at adults who's childhood was brought back via the movie and who may want to drop some cash on a toy like the OP thy had as a kid.

We, the collectors, have had ample chances to get this mould through various reissues, many of us may even have our original G1 Primes. This isn't for us.

So given all of that, 5+ works just fine.

No. 'Cause then Hasbro wouldn't be able to sell the product to major retailers. 5+ is the standard for toys. Anything more and you're entering a very specified market with a limited number of retailers.

Sure Hasbro could sell them through comic stores, collector shoppes, and the web, but sales would be drastically down then they would be if they sold it through major retailers like TRU, Target, Wal-Mart, etc....

Unfortunately listing the toy as 5+, which is the right call from the business end of things, means shorter stacks. Is that Hasbro's fault? No, they're just complying with the law.

Remember, the Hasbro releases of MP Prime were even listed at 5+. Why? Because it meant they could sell the product to the larger retailers. So if MP Prime got the 5+ rating why would give a G1 reissue anything higher?

Just to help you out bud, if you look at the bottom right corner of each post, you will see a icon for "reply". Click on that too quote ppl and comment. You can also hit a "quote" icon when you hit fast reply at the bottom of the page. Hope this helps! As know one told me i just had to find my way around :P

About this Prime release. I really think it will look good in person and these pics (like ALL Hasbros pics) make the toy look horrible

some of the g1 reissues are STILL warming shelves here (i know prowl was there just last week - a supposedly popular character!)

the mcfarlane figures that TRU and Walmart carry are very sparse when it comes to anything but sports figs.

as for the master replicas light sabers, star wars is a HUGE market. it easily dwarfs transformers.

this means that the demand is far less so they have to market and appeal to a much broader audience. which in turn means conforming to safety standards so they can be sold to children.

also, i don't know about your TRU, but the TRU's i've been have a huge problem unloading them, which makes it even less likely that they'd carry many adult collectibles for lower selling brands. this is why Commemorative soundwave saw a VERY limited release. they learned alot from the commemorative series.