The LA Times reports that, as had been rumored previously, the Chevy Trax in Age of Extinction will be named Trax. It's the centerpoint of a large marketing push for the Trax in China, which is currently General Motors' biggest marketplace. Click the title for a better look at the promotional photo, and for an excerpt from the article!

The Trax is expected to be a niche vehicle in the U.S., but it's key to the company's strategy in China. The marketing arrangement — the placement of an American car in an American film to target Chinese audiences — is pioneering, product-placement experts said.

"This is the first big American brand making a play for China via product placement," said Deborah Harpur, chief executive of Mogul Inc., an entertainment marketing agency specializing in product placement. "It's a fantastic platform to do this kind of deal."

The Trax placement is part of a wide-ranging brand integration deal between GM and Paramount. The "Transformers" franchise has been wildly popular in China, which is now the second-biggest film market in the world, trailing only the U.S. The last film in the series, 2011's "Transformers: Dark of the Moon," grossed $165 million in China en route to a $1.1-billion global box-office take.

Rob Cain, a producer and veteran studio consultant on China, said the new "Transformers" picture should handily outperform the last film there.

The "Transformers" franchise is uniquely suited to automotive product placement because many main characters are cars that change into robots. In the film, a Trax transforms into a robot of the same name. The car appears in a portion of the movie that was shot and takes place in China. 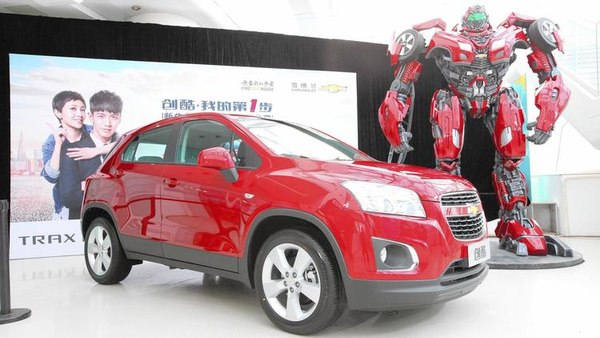