Yup, you heard it here first. Following on our previous report of the Paramount casting for new leads, we have what appears to be confirmation that it is for real. Also confirmed are the departure of Shia LaBeouf or Rosie Huntington-Whiteley from the forth film. Casting is looking for a female lead role that is an 18 year old or above who can play high school senior age, and the male lead is an early twenties. Again, we have some confirmation on the "Texas race car driver" as the male lead. Shooting begins April or May of 2013 for the film. Read the full detals on the casting call now. Transformers 4 Auditions and Casting Calls

"Transformers 4" will begin filming in April or May 2012.
AB Media Publishing, LLC

Di Bonaventura Pictures and DreamWorks SKG in association with Hasbro are in development on the Paramount Pictures science fiction action film "Transformers 4". The casting directors are auditioning actors for the new lead roles in the film, as neither Shia LaBeouf or Rosie Huntington-Whiteley are returning. The female lead role is an 18 year old or above who can play high school senior age, and the male lead is an early twenties Texas race car driver who plays the female lead's boyfriend. Shooting will take place in various locations beginning in April or May of 2013. This film is currently being referred to as "Untitled Transformers Sequel".

Directors Guild of America DGA Award winner Michael Bay will return to direct his fourth installment of the film series from a screenplay written by Ehren Kruger, who also wrote "Transformers: Revenge of the Fallen" and "Transformers: Dark of the Moon". Bay has said that this will be his final installment in the franchise, however Hasbro has stated that they would like to continue making additional Transformers films with or without Michael Bay. Writer Ehren Kruger's other credits include "Arlington Road," "Scream 3 & 4," "The Ring," "The Skeleton Key," and "The Brothers Grimm".

Foreign talent must be legally eligible to work in the in the United States, and minors must have the proper work permits and Coogan account.

The 2012 Los Angeles Actors Resource Guide eBook includes the following information and documents for adults, minors, and foreign talent who would like to work as an actor or extra on film and television productions in the United States:

In addition to the following Los Angeles Actors Resources:

See the post titled Headshot and Resume Information regarding how to submit for acting roles.

Submit photos and resumes by mail only.
No phone calls or personal drop-offs.

Do NOT send photos and resumes to the production companies, as they will most likely end up being thrown away. They do not cast the films, rather they hire casting directors who sort through the thousands of submissions.

Optimus Prime (Peter Cullen) returns with a new group of robot characters, and new male and female leads in "Transformers 4". The story will take off where the last film left off in Chicago, and expand on the history of the first three films in the series. 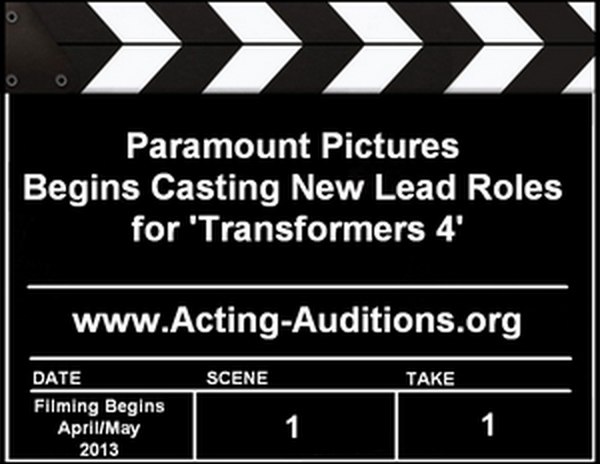 glad its "confirmed" even though Shia already flat out said he wasn't coming back already. i'm sure the fandom will hate who ever the new kid is since the fandom has a habit of hating humans. i enjoyed Shia and have liked his shows/movies since the early 00's. albeit, at times he was really annoying constantly screaming.

OH NOES!! So does this mean we have to gear up for another actor who is even worse the Shia?

Martin Lawrence & Will Smith return in a blockbuster mash up, BAD BOYS III Will Smith's character finds out he was driving around in Dino all along, shenanigans and massive car chases ensue!! :woot :awsum :woot

Yep, I'm prepared to die at the hands of the hardcore readers on this forum now. :lurk

Lmao! The only thing that could make this news better was if that said "Bay not returning" haha