It looks like that G1 nod to the Sinner Twin could be a hint at something that is much More than Meets the Eyes if the recent image showing a Beast Hunters Abominus is for real. The image shows Cyberverse class figures that will make make up the combiner toy. The figures listed for release in Fall of 2013 include Twinstrike, Hun-Gurr, Blight, Rippersnapper, and Wind Razor. These appear to be a Cyberverse Target exclusive with the words "Existing tooling with new Character Designs." Check out the image below for the full reveal. 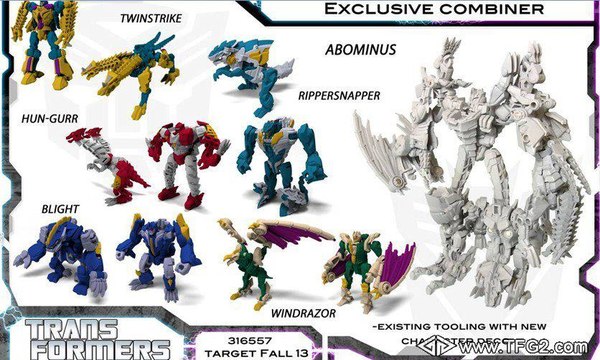 Honestly, as far as the Prime line is concerned, besides that Leader scale Predaking coming down the pike, this is really the only other item I'm super excited about. :bounce

And of course remaining hopeful that the States see an MP Soundwave wash ashore, but that's another thread...

The thighs look pencil thin but other then that it looks nice.

The way this one's shaping up, it'll be worth every penny! Being a Target exclusive, I don't think it'll be all that bad.

Before I get too excited, though, better make certain this will actually come to fruition...

Actually it says "Existing tooling with new character DECO" not design. Means all of these figures, like Twinstrike, will be sold at retail in different colors, but it's the Target exclusive that will be in G1 colors.

At least at the size, it's easier to forgive the lack of real hands and feet for the combined mode.

But now that Cyberverse Commanders run around $10.50 at Walmart I can't forgive it at the price.

At least at the size, it's easier to forgive the lack of real hands and feet for the combined mode.

Can't wait, but I hate exclusives!!!

Not a fan of the cyberverse figures but this thing looks fun. I'll pick it up.

Same here, but...this thing is a FANtastic nod to G1. Looks GREAT! I'll pick it up as well.

It will be very interesting to see a cyberverse combiner. I'll be on the lookout for this. :lurk

Not a fan of the cyberverse figures but this thing looks fun. I'll pick it up.