by Ender on May 29, 2009
Before the start of the Animating Animated Panel, the attendees were instructed to limit their questions to the creative process behind Transformers: Animated, that Animated's life as an animated show was over, and to leave questions of Animated "positioning" for Hasbro. The near capacity audience was large and enthusiastic, but it was hard to shake the feeling that this was a wake.

The panel started with a treat to a series or TF: Animated shorts. Some had been featured on the Transformers: Animated DVD collections as special features, but there were quite a few new ones. Here are some brief descriptions. 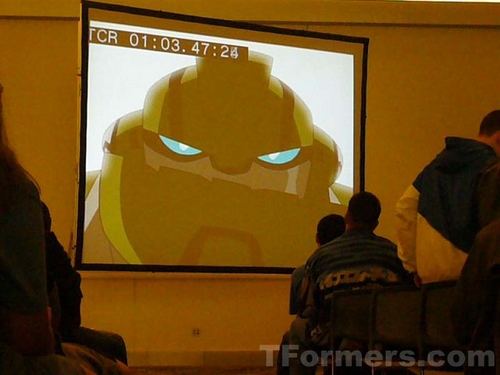 Bumblebee, Bulkhead, and Sari watch a mime in the park who is trying to be a robot. The Autobots take issue with the inaccuracy of the performance. Bumblebee decides to show the mime how it is done. Bulkhead asks Sari about the applause Bumblebee’s performance generates and Sari explains that it is appropriate to clap at the end of a show. Bulkhead proceeds to clap, nearly leveling the park.

Ratchet and Sari are repairing Bulkhead, and Ratchet declares the job done. Upon sitting up, Bulkhead notices that a great deal of parts remain and asks about them. Ratchet responds by pouring the parts down Bulkheads throat. As Sari and Bulkhead remain terrified, Ratchet leaves, whistling.

Starscream conquers the Autobots, is lauded by the Decepticons, and served by Megatron. Then Megatron wakes him, informing him if he napped during staff meetings he would not wake up.

The screen is filled with a familiar spinning set of Autobot and Decepticon insignias, accompanied by the good old scene transition music. Except this time it’s hummed by Blitzwing, who is spinning a disk with both insignias from a wire. Lugnut slaps him, and is thanked by Blitzwing for shaking him out of it.

After that there were several character profiles featuring re-used footage from the show.

There was a brief but interesting overview of the process of creating the show, then as the panel ran along the call went out for questions. The aisle quickly filled, some who had hopped up to enter the line sat down in the realization they would not make it to the front. 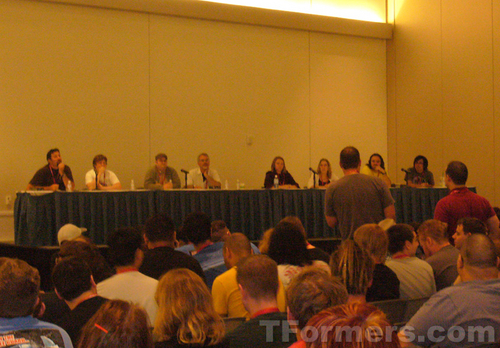 After a few fans took their turns, the panel was forced to close. Like its subject matter it left an audience hungry for more and a long line of unanswered questions.
2 Image(s) - Click to Enlarge 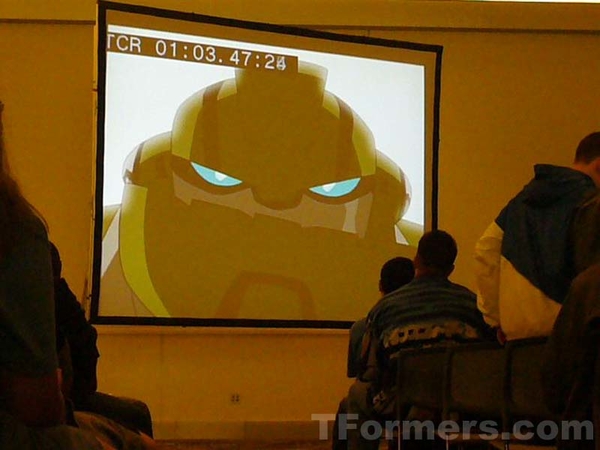 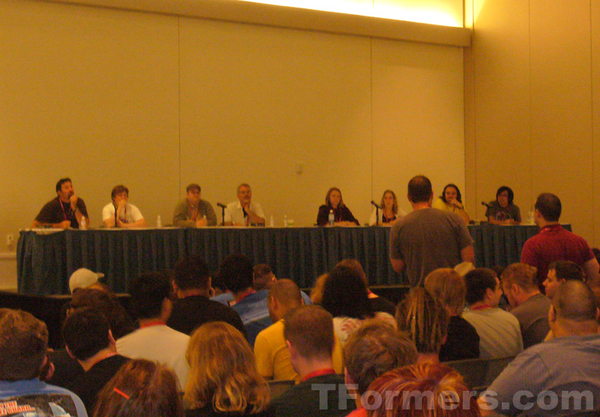