by Peter Van on June 4, 2011
We just got back from the BotCon 2011 Hall of Fame Event, where we were treated to a preview of Transformers Dark of the Moon!

We were given a peek of the first five minutes of the film, as well as several scenes from various parts of the movie, so keep reading below!

Note: All of the images below are not from the event. They are images from previous reports

The film starts off with Optimus Prime explaining The Ark, that they the ship carried technology that would help the Autobots tip the tides of war in their favor. Unfortunately, as the ship attempted to escape, it was attacked by several Decepticon ships, that successfully disabled the ship.

NASA immediately picked up on the crash and a plan is set in motion. It is escalated all the way to President John F. Kennedy, who decided that the United States of America needed to reach the moon before the USSR.

Through a series of montages, an announcement by JFK, NASA developing their space program, eight years later, Apollo 11 launches and puts the first men on the moon.

Upon landing, one of the astronauts rips open a sealed package to reveal Top Secret mission plans.

Once Neil Armstrong and Buzz Aldrin walk on the surface on the moon, they are given twenty-one minutes of radio communications "loss." Loss in quotations because NASA purposefully sent interference so all personnel not cleared on the secret mission could not hear the transmissions. 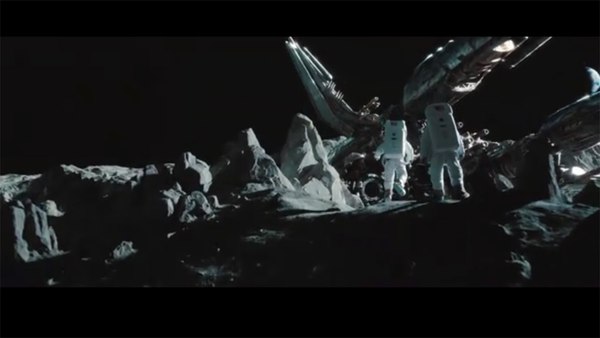 Armstrong and Aldrin walk to the dark of the moon, where they discover the ship and are introduced to a Sentinel Prime in stasis lock.

The two astronauts continue to walk in the ship and relay back to NASA that the ship is too big to explore with their allotted amount of oxygen.

As the camera pans out to show that the astronauts have "reestablished" communications, and have planted the flag and the lunar module lands in the water.

When the astronauts emerge from the module, men in government-issue suits grab a very shiny case and put it in another case labeled "Top Secret" and lock it down.

The scene cuts back to the moon, where Sentinel Prime is slumped on a chair, and as the camera zooms towards his face, his left eye animates.

Bumblebee and Dino were driving down the highway, with explosions happening around them. Dino is ahead and passes the destruction but Bumblebee is not so lucky, and Sam Witwicky freaks out inside the vehicle.

Bumblebee transforms and throws Sam forward and through the air simultaneously. As Sam flies forward, Bumblebee is following closely, deflecting any debris that comes his way.

When Bumblebee gets close, he grabs Sam, lands and rolls, and transforms back into his vehicle mode, putting Sam back into his seat.

Like the previous Birdmen clips we have seen before, this is a full version of the scene. Four Ospreys are approaching downtown Chicago and plan to use the Willis Tower (previously known as Sears Tower) as cover from the Decepticons.

As they approach, Starscream begins attacking and ripping apart one Osprey, causing it to crash into the water. Starscream then jumps to another, ripping one of the wings off and as the Osprey sputters, it flies into another, causing them both to catch on fire and begin their uncontrolled descent.

Major Lennox and his team are told to clear out by the pilot. They put on their helmets and disembark, while one of the jumpers were not willing to, holds on for dear life.

As they float down, a Decepticon-aligned ship pursues them and begins to fire upon them, taking out one of them in the process.

The pursuit continues through the city, and they fly through a broken building, and the Decepticon ship crashes.

Once free, the Birdmen deploy their parachutes and safely land.

As Driller rips apart a building downtown, USAF Tech Sergeant Epps, Sam, Carly, and others begin sliding down the outside surface of the building. Epps and another NEST soldier pull out their grappling guns to shoot grappling lines so they would not fall down the side of the building.

Just then, Jetwing Optimus Prime flies in, saying, "I'm coming for you!" and begins shooting at Driller, taking out one of his tentacles, narrowly escaping an attack.


Related: See the trailer where Optimus Prime fights Driller
Optimus flies around the building, shooting a hole through the building, flying through, and taking out more of the tentacles. 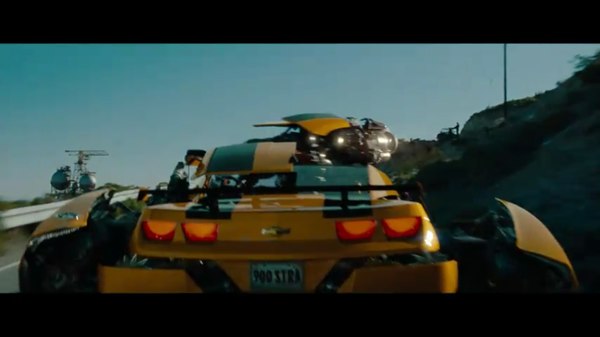 lololol....NOBODY local calls it "Willis Tower". Most of them are trying to change its name back anyway. I live way north of Chicago, but I'm part of that movement anyway.

That's what they said in the film, so, that's what I wrote.

I understand how weird it is, but I just report what happens.

the first 5 minutes sound impressive, can't wait for the film.

I need a cigarette.

lololol....NOBODY local calls it "Willis Tower". Most of them are trying to change its name back anyway. I live way north of Chicago, but I'm part of that movement anyway.

Topspin and Roadbuster fight as a duo? I wonder if Leadfoot isnt in there as much.

Bumblebee probably uses his weapons just to get into the city. Wonder if we see them ever again

Hopefully the osprey attack is Hellscream's last hurrah and he finally dies.... 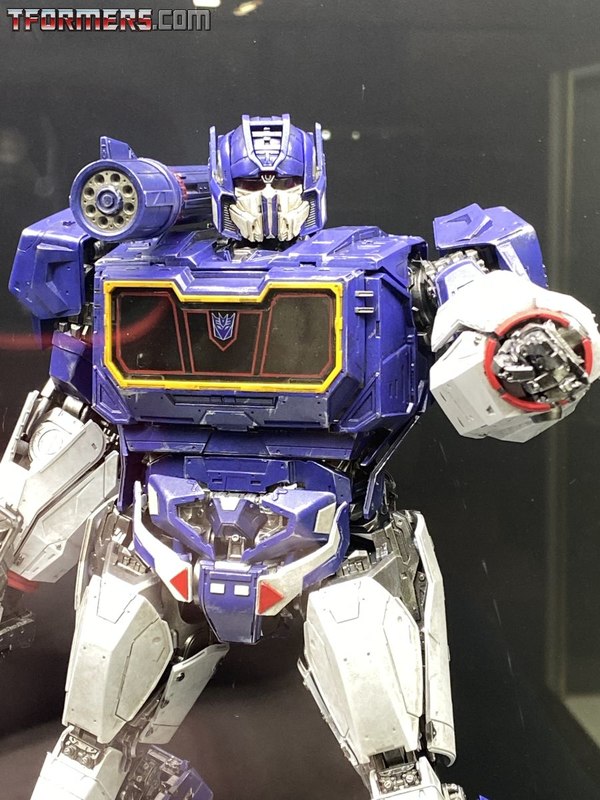 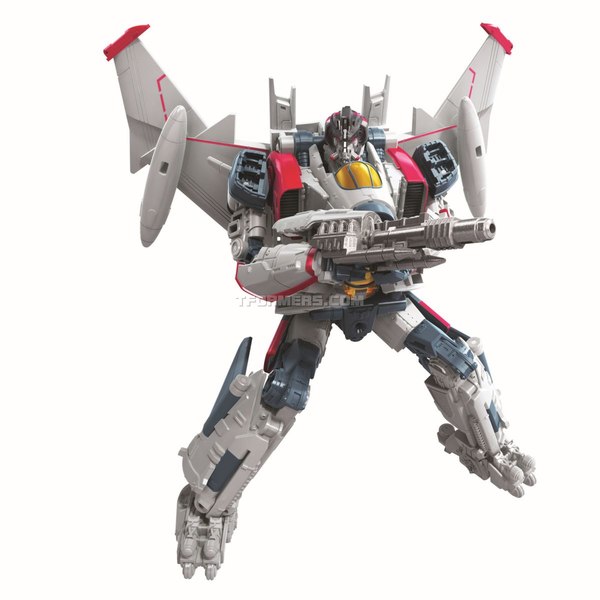 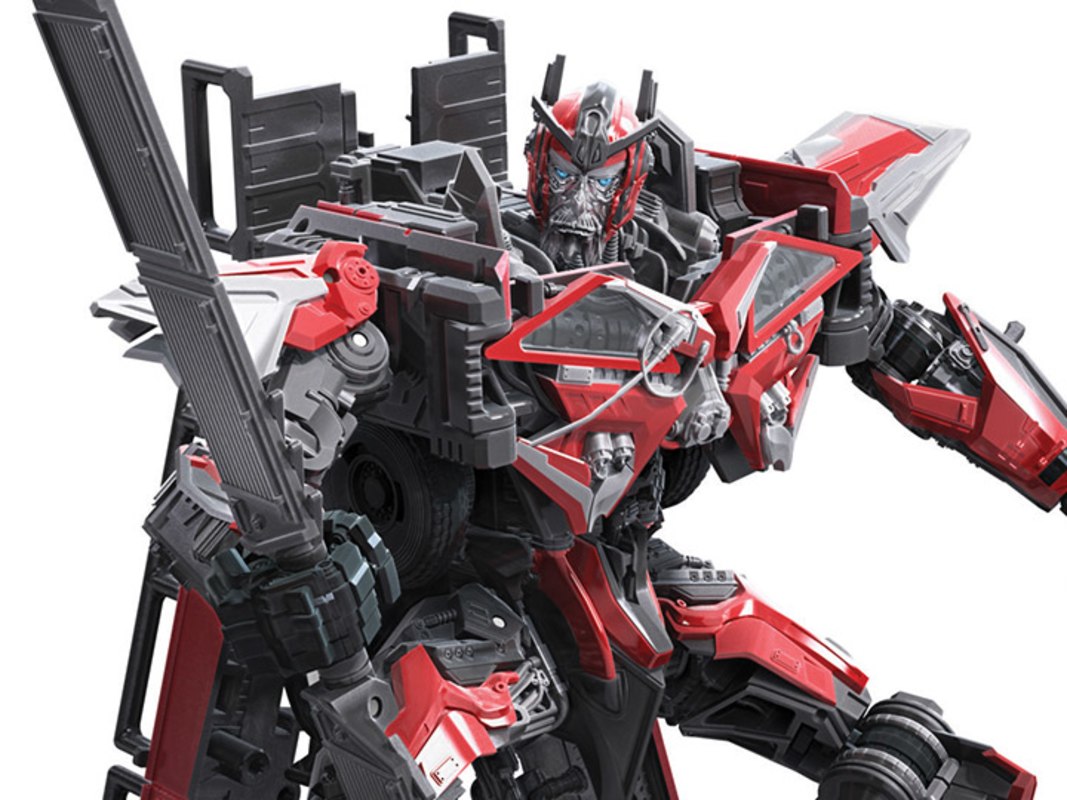 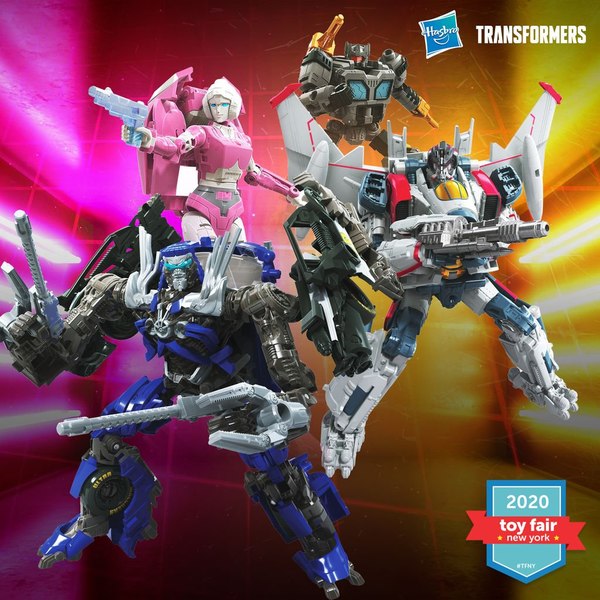