Well, this is certainly a Christmas gift by Fun Publications! The company behind the annual BotCon convention has released their brochure to reveal the six-figure BotCon 2012 convention exclusive set!

The set is a mish mash of the traditional Classics Universe and the Shattered Glass dimension that was birthed in the 2008 exclusive set, and the war criminal Ultra Magnus and his merry band of Evil Autobots will shatter (heh) the barrier between regular and inverse to fight the heroic Autobots and evil Decepticons! 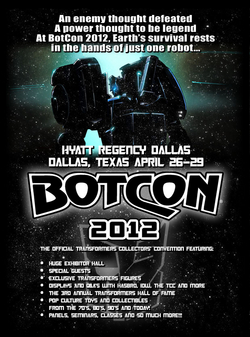 In the Shattered Glass side of figures, we will get Evil Ultra Magnus and Tracks as well as Heroic Treadshot and Soundwave.

For the traditional Classic Universe side, the “Overlord” Classics Gigatron, and the Pretender Commander Classics Metalhawk will round out the set.

While it is unknown specifically which mold Evil Ultra Magnus or the other robots will take, the teaser poster for BotCon 2012 (available on the right) features a silhouette of Transformers Reveal the Shield Optimus Prime.

Also this year there is a Primus Golden Ticket, where a current club member can add $300 to their package and receive the following perks: