by jay on September 8, 2010
Hasbro Studios has finally revealed the voice actors and characters for Transformers: Prime, along with information for the show.

The show will be adding some decent star power with Dwayne "The Rock" Johnson joining the cast as the voice of Autobot Cliffjumper, Adam Baldwin (Chuck) as Breakdown, and Ernie Hudson (Ghostbusters) as Agent Flower.

Oddly enough, the voice actors for the characters of Bumblebee, and Soundwave were not revealed. These characters were shown during BotCon 2010 back in June.

Two new Decepticons, Breakdown and Knockout have been added to the list of characters. 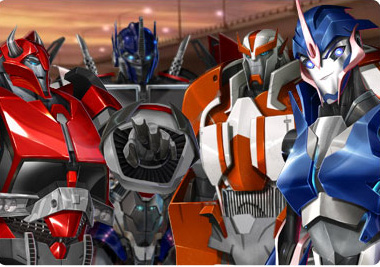 The Transformer saga continues as Optimus Prime and the Autobots battle the evil Decepticons, led by Megatron. With the future of the human race hanging in the balance, three young teenagers become critical in helping the Autobots prevent the Decepticon Army from conquering Earth. Prepare to experience the world of Transformers like never before.

The Transformer franchise sees the triumphant return of the Autobots characters to television in cutting edge computer-generated animation. The series both deepens the epic mythology of Autobots and Decepticons, while starting fresh for a new generation of viewers and future Transformers fans. With a bold and modern new look, Optimus Prime, Bumblebee and others are back to roll out against Megatron’s latest plots to conquer Earth. The Autobots may be few against the Decepticons menace, but they find increased strength here on their home away from home via bonds they've forged with three human teenagers. Make no mistake, the Transformers series will deliver heavy metal action and nail-biting suspense