by Primus on October 27, 2009
You may have seen the Ebay auction for the original Transformers Box Art by world renowned illustrator Jeff Mangiat. TFormers was fortunate enough to get a little time with Mr. Mangiat to do an exclusive interview asking some questions about his work on the Transformers past and present as well some of the intimate details of how these Transformers paintings and box art came about. 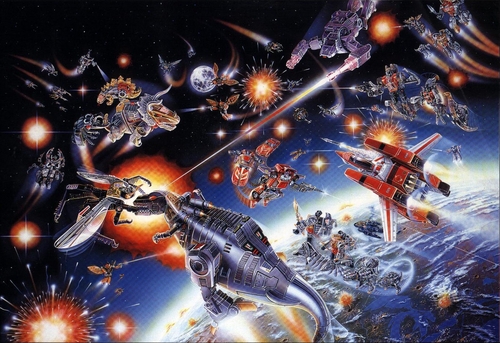 TFormers: Tell us a little bit about yourself and how you got into doing illustration for a living.

Jeff Mangiat: I would first like to thank the webmasters, community members and bloggers for the very kind words written about my painting. I was recently going through my flat files and found the painting I put up for auction. I forgot how nice the moon painting was. A few months ago my son discovered the world of transformers on the web and it was very exciting to see that they are so beloved. I made some contacts and here we are.

I have been very fortunate in that I always knew I wanted to be an artist. When I was in the 2nd grade my father found that Pratt Institute was the best art school for me. I started working for Hearst publications in my junior year doing automotive renderings. That taught me how to do mechanical drawings and do them fast. I soon found myself working for magazines such as Popular Mechanics and Popular Science.

TFormers: How did you get involved with doing art for the Transformers packaging?

Jeff: My next step was to join Mendola ltd.; the premier artist representatives founded by Joe Mendola, a pioneer in the field of Illustration. Early on I did covers for Newsweek magazine (many done overnight). One of my favorites was a painting of a robot with a monitor for a head and torso. On the torso screen was the superman logo. Supercomputer! My work quickly expanded to other fields, toys being one of them. I started working for Hasbro doing game boards. With my automotive background, the transformers were a natural fit, and the rest is history.

TFormers: Are you a fan of the Transformers series new or old? What do you think of the new movie from Paramount and Dreamworks?

Jeff: I love all the Transformers. Each era has it’s own charm. I must say, I know what it took to draw up and paint 1 robot, so when I saw the first Transformer movie I was blown away. When “op” declared in his deep baritone voice,” I am Optimus Prime” I wanted to stand up and say, “I drew him!” I worked on a few projects and had early frames from the movies (Transformers- GI Joe) and still sit in awe watching them. 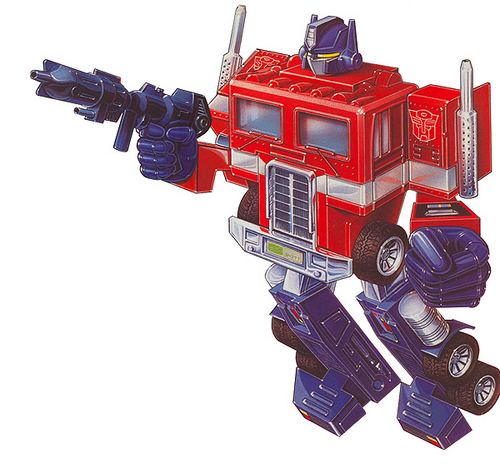 TFormers: Did you work on just the Transformers Generation 1 murals? How many of these paintings did you do?

Jeff: I did a good number of robots for the front panel. I couldn’t tell you how many. My favorite was the original Optimus Prime (how could it not be!) I remember doing the Porsche, F1 car and some of the jets. I did the 2nd and 3rd back of box paintings. The first being the Dinobots battling in space above an earth ravaged by war. How nice! And, of course, the battle moon one. I worked on them till they switched production back to Asia and the animation houses. A sad day.

TFormers: What was the background or inspiration for showing the robots fighting in deep space?

Jeff: When it all started it was some cool new thing from Japan, and I didn’t know much about them. As for deep space, first there was 2001- A Space Odyssey. Then Star Wars. I sat through it twice with my wife the first time I saw it, refusing to leave the theater. Like experiencing the Beatles in the 60s, I feel sorry for today’s kids not knowing the power of these movies when they originally debuted and how they changed everything. Of course today we have movies like the Transformers, where anything is possible. That’s another story. Anyway, they were robots, and I figured why couldn’t they have rockets in their feet. No one knew. It opened up the landscape to include the sky as well as the land and was easier to spread them around to showcase each one. A simple solution.

TFormers: Did the Taraka Diaclone art designs play a role in your work?

Jeff: The wonderful drawings I was shown, featured the robots in their majestic foreshortened view, and that’s what all Transformers were based on. I feel a major reason for their success. 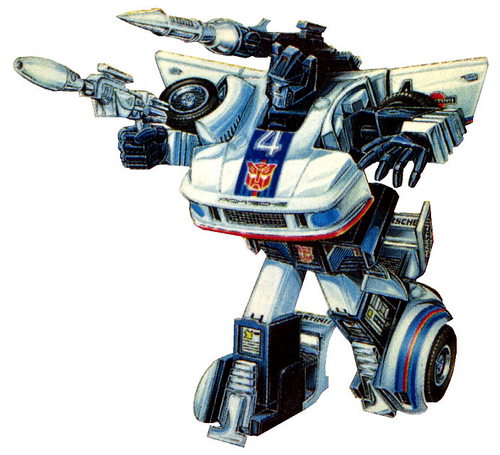 TFormers: Can you give us some idea of what the process of making these paintings was like? How long did it take to make one the paintings?

Jeff: For the single front panel robots, I was given an early production toy (often the parts were joined with some sort of putty) or a style sheet with colors and decals. I know I have some of each somewhere. I would draw it up in pencil, Xerox it and fax it to Hasbro. I would then transfer the drawing to cold press 172 Bainbridge board. Paint and airbrush the final rendering. I used Windsor Newton designer gouache and a very fine sable haired brush. They usually took a few days to render.

The first back of box painting was of the Dinobots (34x 28”). That took a solid month to do. When I delivered it to the guys from Hasbro (they came into NYC) they looked at each other and were blown away by the detail. I remember putting my heart and soul into it. The original hangs in my studio. It is beautiful. The auction painting was the next of the backs to be done. Being there was a base transformer, I put it on a moon. (Sorry I don’t know the names of these guys) It’s like an explosion of Transformers!

TFormers: Who came up with the ideas for each piece of art? Did you have any input on the layout or contents of each mural?

Jeff: I designed each one. As for the front, they had to be designed to fit the box and cutout.

TFormers: Was there much discussion of how many or which robots had to appear in a given painting?

Jeff: I was told what had to be shown, pure and simple. Totally marketing.

TFormers: What did we miss? Was all of the work you did for Transformers published?

Jeff: Everything was used. I recently did a game board for the movie, but it was put on hold due to the economy. 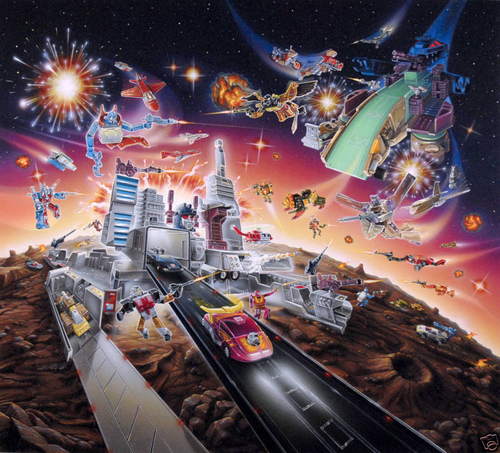 TFormers: What was it like working with Hasbro on one of the most popular toy lines of the 1980s?

Jeff: For an illustrator, having a line where you consistently have work over a long period of time is it! To have it be a national craze and be able to go to the local store and see people buying it is wonderful. I was very fortunate to work on them and it is one of the highlights of my career.

TFormers: What other popular culture properties have you worked on?

Jeff: I’ve done work for GI Joe- just did some of the figures for the recent movie toy boxes. Did the covers for Gobot and Thundercat magazines and the entire line of Starcom. Robot type kids meal boxes for Burger King that I did years ago remind me of Wall-E. Also game boards for Allies and Axis, Where’s the Beef, Big foot, Power Rangers, and more recently, the game of Clue in Paris. I’ve worked on a few video games and numerous other toy boxes. I’m still just a big kid who works at home and gets to do what he loves.

TFormers: Do you have any plans to publish all your Transformers works?

Jeff: Unfortunately I do not have enough to do such a thing. Or have the knowledge and database you guys have. You should all pool your resources and do it.

TFormers wants to thank Jeff for taking to time to share all this great history with us. You can see more of Jeff's work online in his online Illustraion Portfolio. Also, be sure to check out the Jeff's auction for the original 1986 box artwork now on Ebay. 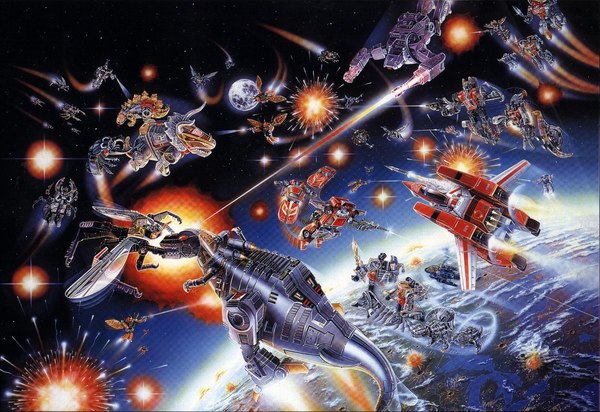 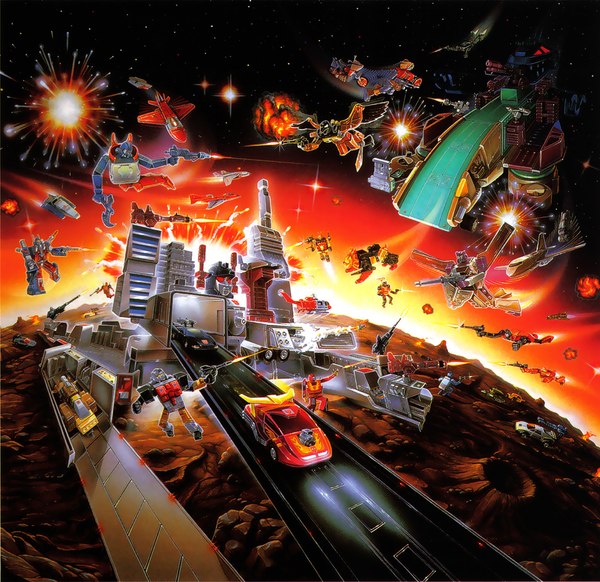 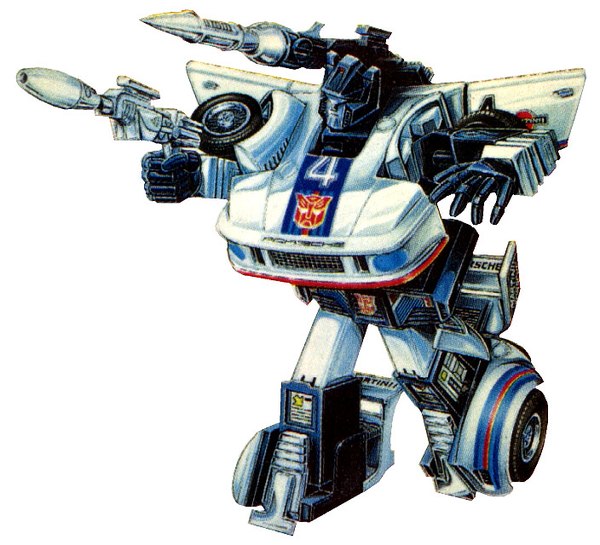 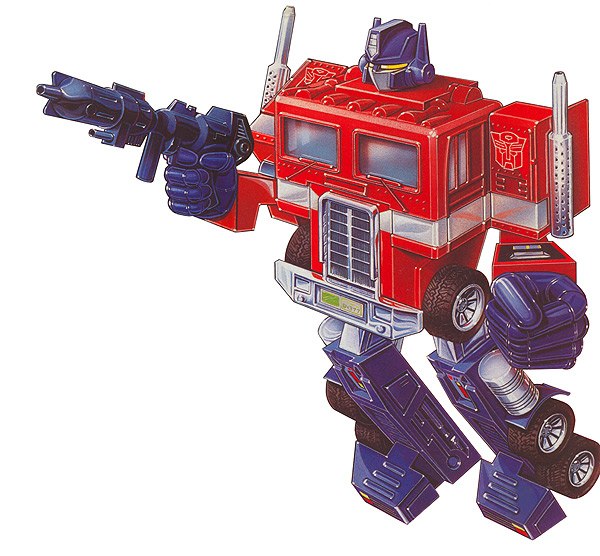