The panel starts off with a trailer of Transformers Universe which is the one that we were shown during the Wednesday Hasbro preview which shows off the Autobot and Decepticon Brawler classes and says that we must honor the past to change the future.
Related: See the Brawlers in action

Right off the bat, Jagex and Hasbro want to make clear that this massively multiplayer online (MMO) game is not a tie-in to the live-action Transformers films. It is more tied into the Transformers Prime series.

Also this story is unique to this game and does not tie very much into the game, says Archer. We will see things we have not seen before as Hasbro is using a lot of avenues including the MMO craft a wider story and to tell a different view on the Transformers Prime Universe.

Over the next few years we will learn where the Quintessons fit in this Universe
according to Archer.

Like they told us on Wednesday night, they are pursuing certain voice actors from the shows that almost have to be involved. They are not any definitive voice actors just yet. 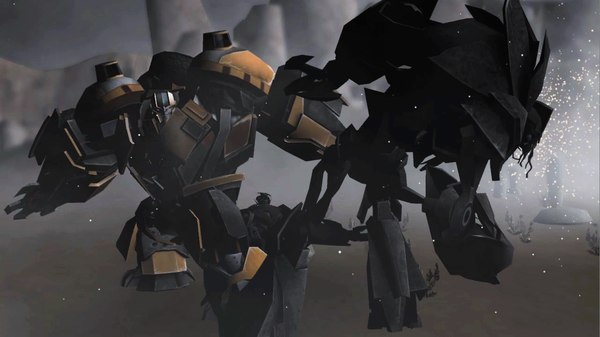 Jagex explains that a browser-based game will allow players to see others that are online on, for example, a social network where they can click and quickly join the game. The studio stresses that there is a lot of strength in the web-based games these days and they say the quality of graphics will be like you watching an episode of Prime.

A player will be able to power up in both modes while clashing in both player-versus-player (PVP) and player-versus-environment (PVE) type games. The vehicle mode will be involved in a lot of tactical play. There will be a targeting and melee system.

The customization will be limited on certain forms, such as a smaller bot that will not be able to carry as many weapons. But be happy that there will be lots of weapons and accessories made available in the customization of these characters along with multiple weapon attachments.

There should be more forms available to female characters other than motorcycles. 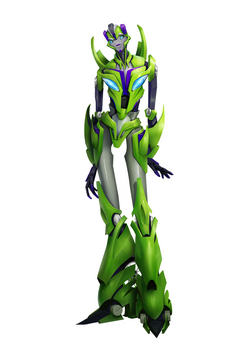 Some potential characters include Waspinator, who has been mentioned a lot by the Jagex panel. They also hinted that renegade Decepticons could be in the game.

There will be options for the casual player to do things that doesnʼt take hours and
hours of play. They are also going to cater to the hardcore game players.

They have moved on from G1 but have tried to take the best elements from past Transformers
shows and put them in Prime. Prime is like a modern G1 and that is the story they are
trying to tell.

Samantha, the Senior Artist says that she loves the style of the robots in the game, that they are a lot like G1 but have a more. She is a newbie at drawing Transformers and vehicles before this game but she loves both and loves designing the weapons for the
game.

The game is being built from the ground up and will utilize Java. For those who have misgivings about the Runescape game, the Jagex panel specifies that this team is completely different than the ones responsible for that game.

Jagex states that they are aware of the massive following for Transformers and they are working closely with Hasbro and listening to feedback as to where they are going for the game.


The browser-based game will be free-to-play for players 13 and up. Jagex has not announced how they will monetize the game.

There's a potential for combiners.

No word on naming of characters or clans or banner have been mentioned yet.

Browser-based games allow for a great deal of flexibility, including being able to play the game on things like smart phones but nothing like that has been announced.

There is a potential that these consoles eventually but nothing confirmed is for now. Want to get it right on a browser first.