Jeff Kline revealed in an interview with us at BotCon 2011 that everything alluded to in Transformers Prime will be fulfilled.

And he was not lying!

We have posted a clip that previews what is to come in the second season of the three planned seasons of Transformers Prime, and in this season, the Autobots team with an unexpected ally to battle a legendary threat to Earth's existence.

The video simply teases, "He is Coming..." while the figure himself says, "I awaken."

Who do you think it is? Let us know in the comments! 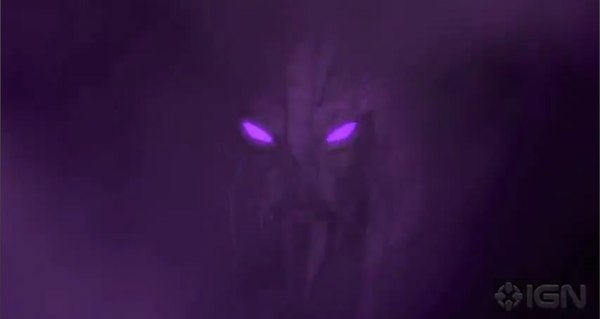 Yeah I remember that, it was pretty sad for the most part.

Gotcha! I didn't know you were referring just to the WW version without the backstory. You might be out of luck there. TF Prime seems to like their designs similar to the movies. The same thing happened when the first X-Men movie came out. After it was a big hit, Marvel changed the comic characters to match their movie counterparts. They had everyone running around in black leather. It was actually pretty lame.

The War Within Fallen looks way better would love to have a plastic version of him :P

The Fallen was a servent of Unicron is War Within, in ROTF, he was only a fallen Prime with no allegiance to Unicron. There was not even a mention of Unicron.

SO if there is a Fallen in Prime, I hope they design him off of his War Within character.

So you'd rather have The Fallen be a harbinger of Unicron than be his own independent character? Even though you think Unicron is an overutilized character?

Maybe they'll get really creative, make Unicron a Headmaster, and have The Fallen be his head :P

The Fallen was a servent of Unicron is War Within, in ROTF, he was only a fallen Prime with no allegiance to Unicron. There was not even a mention of Unicron.

SO if there is a Fallen in Prime, I hope they design him off of his War Within character.

Fair Enough, though for me the head screams Unicron

Just an update here. In the latest TF Prime episode Bulkhead DOES mention The Fallen.

He did so only jokingly but that does acknowledge the fact that The Fallen was/is a part of this particular Transformer continuity.

Stunticons need to happen. On the Autobot side it would be a toss up between Aerialbots and Protectobots.

At BotCon, Jeff Kline said everything alluded to will be fulfilled. And Unicron's Blood has been mentioned multiple times.

THIS! And like Lord Onslaught said, 'Dark Energon' and 'The Blood of Unicron' is mentioned or used it seems like in every other episode...just makes sense.

It's not the Fallen, its Unicron, a couple other things we are going to see in the next season are the Dinobots and Combiners, but they didn't say which combiners

And that's awesome! Not quite sure how Dinobots would fit into this series, but they have squished our spider vixen into the mix...and my son will LOVE some Dinobots. I've been jonesin' for proper combiners...Stunticons or Combaticons and Aerialbots might fit in nicely with this series, something beside going straight to Constructicons, as much as I love'em! :schin

Fair Enough, though for me the head screams Unicron