It is a little unbelievable, but San Diego Comic-Con International 2011 starts tomorrow! Our staff is en route today in time for the preview night tonight at the San Diego Convention Center, but one of the main questions we have is, "what will we see this weekend?"

Thankfully, Transformers related things will be front-loaded, with IDW Publishing, Hasbro, and Hasbro Studios panels on Thursday, so we will not have to wait long.

Let's take a look at what to expect here.

Jump to a Section: Toys | The Show | The Comics | Third Party

TRANSFORMERS DARK OF THE MOON

Human Alliance Soundwave
We expect that Hasbro will show us a barrage of Soundwave figures since it has finally been revealed that he was the Mercedes-Benz SLS AMG.

During BotCon a product page on Walmart.com revealed that a Human Alliance Soundwave and Laserbeak will be coming.

Hasbro confirmed as much when they said that a Human Alliance will be revealed after June 29th. 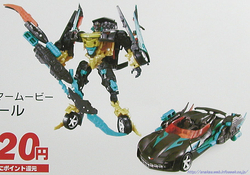 Mechtech
A look at Dark Iron, the Quickstrike homage, will most surely be on-hand for us to consume. The figure is using a refurbished weapon from Mechtech Starscream. Many believe that the head mold is borrowed from Starscream as well, but Hasbro stated that it was a new head mold, so stay tuned for a detailed look at this figure.

Related: First Look at Transformers 3 Dark of the Moon Dark Iron, the Quickstrike Homage
Oh, and stay tuned for more repaints that are obviously coming. Recently, Hasbro has been doing well with giving some new ideas with repaints, including imaginative redecos, alternate head molds, and mix-and-match weaponry, so it should prove interesting. Armor Topsin is an indication of this.

Cyberverse
We expect way more Cyberverse sets to come our way, too. So far we have gotten some interesting and unique ideas, so please keep that idea in mind when our live blog takes place at 2:30PM local time on Thursday.

Also, we should get a look at the anticipated Twin Twist deco of Deluxe Mechtech Topspin that will be packaged with Deluxe Leadfoot as a Target store exclusive. 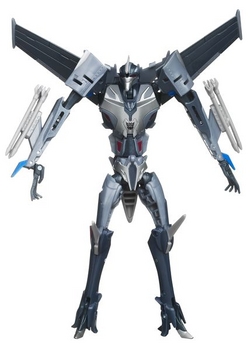 TRANSFORMERS PRIME
With the line launching December 1, 2011, expect to see some sneak peeks at Wave 2 figures as well.

Quick peeks of Wave 2 Cliffjumper was shown during BotCon, as well as Wave 3 Terrorcon (Cliffjumper Repaint) and Vehicon, so while we are not confident, there may be a possibility these may show up in the cases in the showroom.

Additional figures we should be able to get a glimpse of Voyagers Optimus Prime and Bulkhead figures.

Hasbro treated attendees of BotCon 2011 some cool ideas for Transformers Prime in 2012, and hopefully that trend will continue with some realized ideas.

New Cyberverse sets in the Transformers Prime realm will continue to be expounded upon, we are sure, as well as characters that have made appearances on the show.

GENERATIONS
Hasbro has said at Toy Fair and BotCon this year that Generations will continue this year.

With the year more than halfway over, this is pretty much the only time that they can at least tease some figures.

If not, we do not have much hope in seeing any mass release figures in this line for this calendar year.

Surprisingly enough, as we write this, a new case assortment has leaked out including Black Shadow and Junkion!

And that of course, leads us to... 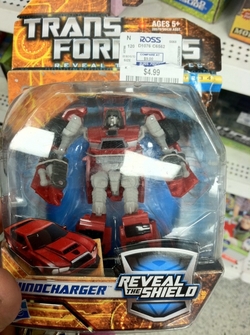 REVEAL THE SHIELD
Hasbro promised to get these guys down the pipe. However, after they said this, Reveal the Shield Windcharger, Solar Storm Grappel, and Lugnut showed up at Ross with deep discounts, sometimes at 50% the MSRP.

What this means, we are unsure. But at least they came out. Maybe Hasbro will unveil some solid distribution plans during this time.

NEW YORK COMIC-CON EXCLUSIVES
Hasbro announced at BotCon that the company will be making its freshman appearance at New York Comic-Con in October and during that same weekend, we received information from a reliable source that they will also be offering exclusive figures at the event.

The source said the figures will not be related to Transformers Dark of the Moon, and since Hasbro is already pushing Transformers Prime with the exclusive San Diego Comic-Con Optimus Prime First Edition it will not be surprising that we see another exclusive from this line.

KRE-O
We do not expect anything new from this realm, but Hasbro may surprise us. With Hasbro's press release, they are definitely pushing the KRE-O line and they are obviously proud of it.

RESCUE BOTS
Thought we forgot, didn't you? The line for preschoolers in age and at heart should anticipate this line to hit in August and some new figures should be revealed here.

The Making of Transformers Prime will also take place on Thursday and is a must-watch for fans interested in the development of the show.

We have been invited to attend a roundtable with the creators of the show during this day as well, so look forward to our interview with them.

The cast list at the roundtable are unconfirmed at this time, but we are sure we will get some great information like we did at BotCon 2011. 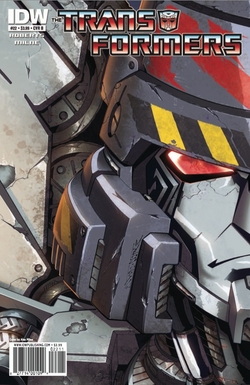 IDW Publishing gave us a good preview of what to expect from the company in the realm of Transformers the coming year, and with John Barber serving as the new Senior Editor of Transformers, expect a re-introduction to him and what his visions are for the future at this panel, taking place at 10:00 AM local time.

CHAOS
Chaos is in full-swing with two monthly issues, leading up to Transformers #125 (renumbered from #32), "The Death of Optimus Prime."

If you are worried, we have heard rumblings that this will be more figurative than literal, so we may hear some new information about this.

AUTOCRACY
The first digital-only title from IDW will serve as a tie-in with Chaos, and some artwork and plotlines should come out of this morning panel.

TRANSFORMERS #81
Editor-In-Chief Chris Ryall says that the things that are stopping us from having this are insurmountable.

However, when the panel did a non-scientific sound poll of the attendees of whether they wanted a continuation of the original Marvel series or more Animated, the audience overwhelmingly wanted Animated.

TRANSFORMERS ANIMATED
Late last week, Marcelo Matere teased that he is working on "official" Animated stuff, but was light on details.

If the comic is not related to the Transformers Collectors Club, which was his last Transformers Animated-related work with the sixth issue of the BotCon 2011 exclusive comic book series Timelines The Stunticon Job, expect to see at least a tease or two during this panel. 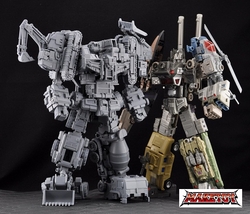 What can we say? Third party shops are taking the Transformers world by storm.

While they are not official by any sense, custom shops like TFC Toys, iGear, MakeToy, BTS, and countless others will, most assured, partner with retailers like TFSource, Big Bad Toy Store, and Robot Kingdom to showcase their products.

Related:
» Read All Third Party News
» Read All the News About Maketoy
We expect to see some further developments from the new entry into the fray Maketoy, who is making an upgrade trailer for the G2 Optimus Prime, Mini-Bots, and throwing their hat into the Constructicons mayhem.

Remember that Transformers is just a very small snippet of San Diego Comic-Con International, so be sure to keep up with the an official ENI iOS app that will give you all the news you need to go.

If you don't have an iOS device (like yours truly), plug ENewsI.com/ipa into your phone's browser to navigate the brand-spankin'-new mobile version of ENI! This site will also allow you to grab Transformers news from Tformers.com on-the-go.

And last of all, we want to hear from you! What do you expect to see at SDCC this year? What do you hope to see? Let us know in the comments!