by ExVee on December 13, 2018
The Facebook page In Demand Toys has posted a packaging stock photo this afternoon giving us our first look at Transformers Siege Greenlight, one of the new products mentioned on an unconfirmed listing of upcoming merchandise. Immediately, this lends much more weight to that list (our detailed analysis of which you can find here, but it also reveals a surprise when you look just a little closer: Greenlight is not a redeco of Chromia, but of Moonracer (with a new head sculpt, of course). This distinction is important, as it means that Greenlight will function as a combiner limb, a capability the Chromia mold - near-identical in engineering, but a different toy entirely - notably lacks.

Greenlight was one of Elita-1's team of female Autobots in the G1 cartoon. One more from the team, Lancer, remains without a toy. Given we're currently three out of four for being able to assemble a full combiner from members of that team, it's hard to imagine that a Lancer might not be on the drawing board for the near future. Though in the meantime it's likely to stir the pot a bit in the fandom as people are left to wonder why Chromia was not herself made using the combiner mold.

The answer of course is one of how the toys are marketed. Chromia is part of the standard general retail assortments. We don't yet know what the intended distribution method is for Greenlight, but being in a larger, more expensive set means it won't be part of any normal case assortment. If sold primarily via online retail outlets, it greatly reduces potential confusion in a general customer base about the combiner functionality that does not exist in any other toys from this product lineup, lending much more flexibility in what can be used.

Greenlight comes with Dazlestrike, a minimally-redecoed Lionizer Battle Master that has a flame effect piece instead of the "energy slash" that Lionizer includes.
Image (click to enlarge) 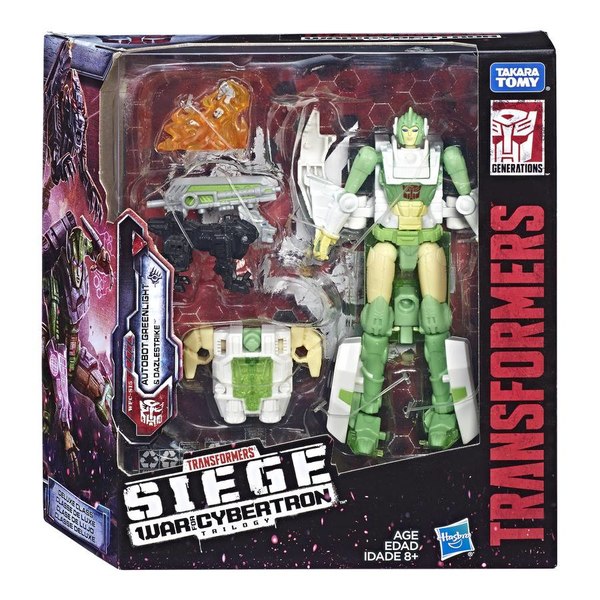