Hasbro was kind enough on June 1st to invite TFormers to a conference call, along with several other fan media representatives, to hear about the upcoming merchandise in the Transformers The Last Knight Premier Edition and store exclusive lineups, official images of which you'll have seen earlier today right here on TFormers. We were afforded the chance as well to ask a few questions of the Transformers Brand Team once the main presentation had wrapped up. Keep reading to find the highlights of this afternoon's event!

Our Hasbro Team hosts for this event were Brand Marketing Director Ben Montano, Design Manager John Warden, Senior Brand Development & Marketing Manager John Frazier, and Design Manager Aristides "Arrow" Membreno. The presentation was a show and tell with several of the toys revealed this morning through the press releases, representing three areas of product. Deluxe Cogman was shown to us, and the team - John Warden in particular - delighted in how the toy incorporated the same connector style as the Titans Return line: Cogman is a Headmaster! The licensed Aston Martin vehicle mode was specifically referred to by Warden as a "transtector". He noted specifically that Cogman the Headmaster was cross compatible with any removable-head Titans Return toy, and that the opposite would also be true. The vehicle was then demonstrated to not only have space to seat Cogman, but it's actually a two-seater, allowing for a passenger. Automotive purists may be pleased to note that Cogman was portrayed driving from the right-hand side of the car in this demo.

This lead smoothly in to Nitro, the Decepticon fighter jet. The jet itself does not reflect any real world aircraft, but John Warden said he really enjoyed getting to design this big jet fighter on his own, citing his background with GI Joe and all of its military hardware. The real treat with Nitro tied back in to Cogman. Nitro is functionally a partner figure - not officially described as such, though. Nitro's robot head is removable, though it does not transform to be a Titan Master/Headmaster itself. But Cogman (or again any Titan Master) can be plugged in the body to represent Nitro being stolen. The Voyager Class jet is also made excellent use of, as the cockpit easily holds one Titan Master hijacker - of course sold separately. Nitro also happens to be one of the top-secret things seen during the Paramount tour in August of 2016, and something I was personally excited about the possibility of seeing as a toy - and this doesn't appear to disappoint!

Premier Edition Dragonstorm rounded out the regular retail offerings we were shown, and this one was a little surprising. The Leader Class toy looked huge in the hands of the team members showing it off, and they recreated a lot of the jagged metal detail seen in the movie CG model, especially on the back and wings. Dragonstorm was described to us as like a Duocon, as it splits and becomes two robots: Dragonicus and Stormreign. Stormreign is reportedly the one with the mace accessory, for reference. Each of these robots was compared as being roughly the size of a Voyager, and have a very intricate transformation. Warden showed us the instruction sheet, which looked almost as dense as Sixshot's, with each individual figure looking to have 20-30 steps. It was not demonstrated, for obvious reasons, but both modes looked very impressive. 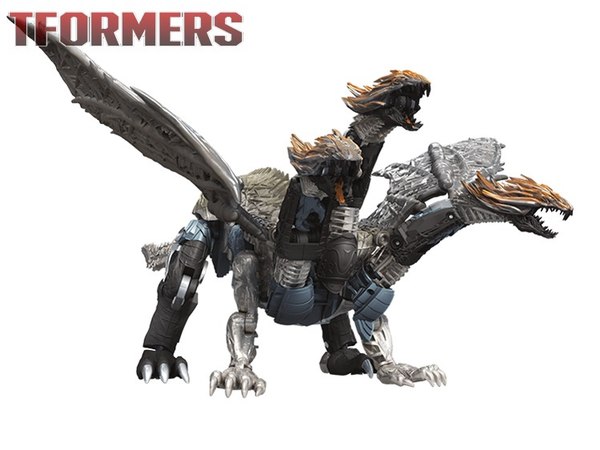 The team then moved on to talk about the store exclusive lines Deluxe Premier Edition Hot Rod will be exclusive to Wal-Mart in the United States. There didn't seem to be a great deal to show off about this toy besides finally confirming it does exist, and is a fully licensed Lamborghini Centenario (full disclosure: I had to pull that from the press release because I'm kind of bad at identifying different models of Lamborghini). Hot Rod represents Autobots United, the specific branding of the exclusive line Walmart will be carrying.

Also on the exclusive front was Mission To Cybertron at Toys R Us. We were given a close look at Infernicus, the combiner utilizing some of the Transformers: Prime Terrorcon Legion molds. The torso robot is all new, and they made mention specifically that the proportions were improved now, acknowledging the prior instances of these molds as a combiner team. They gave us a close look at the Quintessa minifigure included. It's very small, and looked almost colorless in its clear material, so it was a bit of a challenge to get a good look at its details, unfortunately. Also from this Toys R us exclusive subline, they showed Skullitron, a redeco of Steelbane from Premier Edition wave 2, but with a new head sculpt looking like a broken helmet with decaying skull inside. The deco also looked a bit more complex than that of Steelbane.

One of the first questions asked was about availability of the exclusives in other parts of the world. Hasbro definitely wants these to be global, but it will ultimately come down to whether they can connect with a retail partner in a given area of the world. They don't want to see anyone left out of these because of regional distribution, and they did gently suggest that fans from places where these items are available could help those who end up less fortunate.

I had the chance to ask about the proportion of reused molds from Age of Extinction we've seen so far and if later waves would have that diminish. Firstly, they explained the choice was of two major parts: First they recognize new fans and collectors are coming to the brand all the time, and this was a good opportunity in their view to bring certain molds from the last line back in circulation, especially good if some were difficult to find originally. They also cited that they had the chance then to put energy in to bringing the appearance of those toys closer to what's on screen. The Dinobots were specifically referenced for this. But then came the bombshell, of sorts: What they had shown today reflected the remaining Premier Edition product planned for 2017. They said nothing specific about whether there would be any 2018 assortments, but given they also referenced the Bumblebee movie coming up, it came across as though Cogman, Nitro, and Dragonstorm were the end for regular retail Premier Edition. This seems to indicate the line may top out at four waves, apart from Leader Class which seems that it may only have two.

I also was able to ask about Drift in particular, standing out as it does as a significant retooling/reshelling of the Age of Extinction toy. It was said to be a considerable challenge, but a lot of credit was handed to TakaraTomy's engineers, who John Warden is convinced are practicing magicians for some of what they're able to accomplish. Personal curiosity towards the design process led me to ask also whether Drift was ever originally designed with any substantive retooling in mind. It wasn't, which makes what they pulled off just that much more impressive!

Now I'm going to present some highlights of the questions asked by other fan representatives.

The Cybertron redeco of Transformers Cybertron Primus that's part of the Toys R Us exclusive line was explained to find its color scheme inspiration of how the planet Cybertron looked in the G1 cartoon: Cold and dark on the surface, with a warm inside glow. The largely dark blue body plus the orange accent colors were supposed to convey that idea, as well as that of Cybertron coming to life as it transformed, to show it wasn't an inanimate object or otherwise "dead". 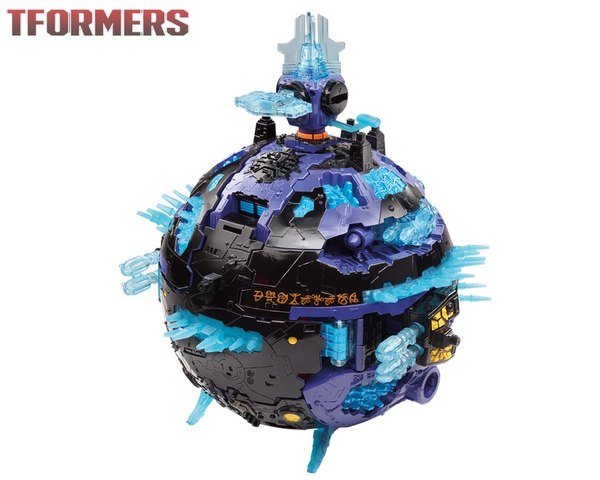 Tiny Turbo Changers are currently only planned to tie in to the movies. The Hasbro team really loves them though. It turns out that Kojin Ono, one of the designers who's been around since Transformers was still just Diaclone and Microman, was involved in their design. Tiny Turbo Changers were reportedly a very long-cycle development, starting with going through a lot of process just to prove they'd be viable as retail products. They're really glad that fans have reacted so strongly positively toward them.

The obvious question was asked: Why were Deluxes given box-style packaging for this line? Part of it is that looking at Voyagers and Leaders over the years, the team really found themselves liking the overall look of those boxed pricepoints, feeling that it was more possible to tell a story around them with the more involved packaging. They didn't name names, but references to talking with other departments on this topic might point to what we'd been suspected, that Star Wars Black Series and Marvel Legends were influencing factors in giving this a try with Transformers. They showed off Premier Edition Deluxe, Voyager, and Leader side by side, and I had to admit, thy lineup does look pretty attractive all put together this way. It was not made clear whether this move would carry forward to any other lines at this time.

Finally, the team members were asked which toys were their favorites. John Warden chose Cogman, because it features a classic play pattern with the Headmasters, and is able to introduce the Titans Return play pattern to a line backed by the major movie, and how that could enable a child with Cogman and maybe another compatible toy to really have their imagination sparked by the experience.

"Arrow" answered next, picking Hot Rod because he loves Lamborghini, and has finally had the chance now to work on one - sort of.

John Frazier went next with two picks. First is Dragonstorm, because all of its detail, and bringing something unique with the three headed dragon mode while having a different play pattern in the "Duocon" style pair of robots. But his favorite of the entire line is Leader Class Megatron. He said when he first saw the "grey model" (prototype" in jet mode, it was like a work of art in its detail and size. John Warden tells the story then of a meeting where John Frazier pointed to Megatron asking, "is that how big it's going to be?" shocked by its size.

Finally, Ben Montano tells the story of how his daughter said "Transformers are only cool because they have a Lamborghini" and he now has a soft spot for Hot Rod now as a result. But he also picked up boxed Movie Masterpiece Optimus and Bumblebee to give them a specific shout out. He described them as a labor of love, where he and John Warden worked together with TakaraTomy for a long time to get these just right. Montano spoke of the experience of helping to launch a new line of Masterpieces, bringing the movie designs in to true Masterpiece level. Because of all those things they stand easily as his favorites.

We at TFormers would like to extend our thanks once more to Hasbro, the Transformers Brand Team, and the PR team for giving us this special opportunity!