Entertainment Weekly featured an article about Hot Rod in one of their latest issues, and has this weekend also made that content available online. The article talks in some detail about Hot Rod and at least his initial role in the movie - explaining the context for the detailed image we saw recently. A little comes out about Laura Haddock's character and her importance as well. All of this is a bit spoiler-leaning, but if you're okay with that, you can find select excerpts below!

In the image here, Wembly comes face to face with the longtime friend she didn’t even know she had — the Autobot covert agent Hot Rod. She’s freaked out — and not planning to go quietly.

Hot Rod has secretly been serving as her protector in the guise of her father’s 1963 Citroën DS.

She has no idea she harbors a genetic secret that could destroy (or save) the world. “[The humans] are empowered in a way that is very different than we’ve experienced before and honestly, it’s not easy figuring out how to empower the six foot human versus the 35- or 45-foot robot,” says producer Lorenzo di Bonaventura.
Art for Hot Rod as the Citroën DS was one of the things displayed in the art department during our tour of the production in August 2016; this article seems to be the first public reveal of that additional form for the character.

Also at the time the EW article was written, it seems casting for Hot Rod was still in progress. Reference is made to not having a voice selected, while audiences for the sizzle reel preview event did in fact hear Hot Rod speaking with a French accent. Lorenzo di Bonaventura is also quoted as saying that "a lot of the robots are not being voiced", so outside the principle cast, perhaps don't expect to be hearing many new characters to speak up. 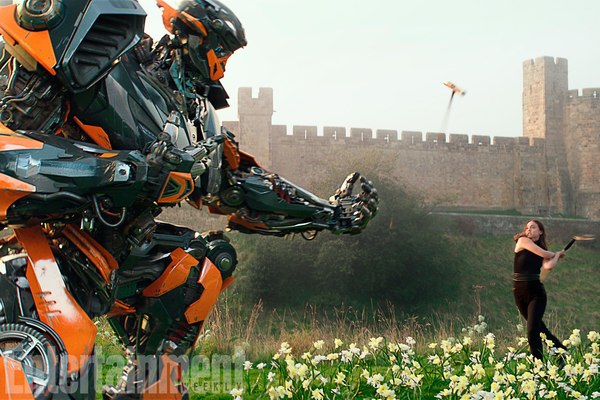