A new promotional campaign for Transformers: The Last Knight has begun! It's focused on the actions of the sinister Transformers Reaction Force, or TRF - seemingly the successors of the "Cemetary Wind" taskforce headed by Kelsey Grammer in Age of Extinction. We've received an exclusive look at the TRF's top-secret dossier on the Decepticon newcomer Berserker. Keep reading to learn more! 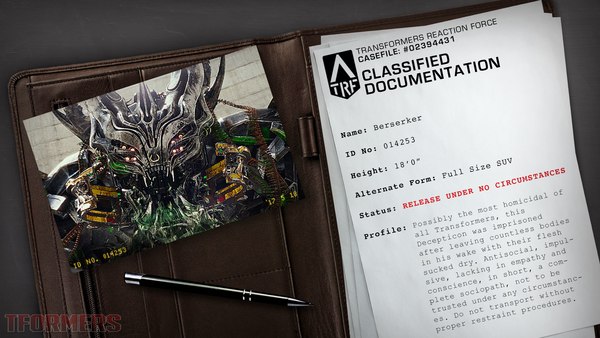 The TRF may be villains, but when they're right, they're right: Berserker sounds pretty dangerous. Also, the "flesh" connotation suggests that his targets are generally not Transformers...

The TRF are apparently moving to cause a media "blackout" with anti-Transformers propaganda on various social media platforms, but the official Transformers Facebook page managed to get this 360-video message out, titled "Now It's Our Turn To Save Them."

In terms of action figures, he got some attention last month as the first entirely new character and mold to hit shelves in the The Last Knight Premier Edition toyline. ExVee reviewed the figure and you can check out the video below!