When Transformers: The Ride opens next spring in Universal Studios Hollywood, the "motion-based ride will tell an original Transformers story and use 3D animation, animatronics and the latest flight-simulator technology to place guests in the middle of a battle between the heroic Autobots and villainous Decepticons," reports Variety.

The ride will push "the boundaries of 3D, hyperrealism and immersive visual effects to transport our guests, physically and viscerally, into the world of Transformers," said Mark Woodbury, president of Universal Creative.

The ride took a long time to construct "had a lot to do with the amount of time truly needed to create and implement a technical feat," Chip Largman, senior VP of creative at Universal Studios Hollywood, tells Variety.

Hasbro, Inc. had final creative decision for which design to use for the ride, including Transformers Prime, but went with the designs used in Transformers Dark of the Moon because of the series' immense success.

"We wanted to have the best experiences of the movies come forward and bring it to life with all original content."

The ride serves as "an extension" of the film and that it is "a natural follow up to the films," says Mr. Largman.

Construction of Transformers: The Ride back in June 2010 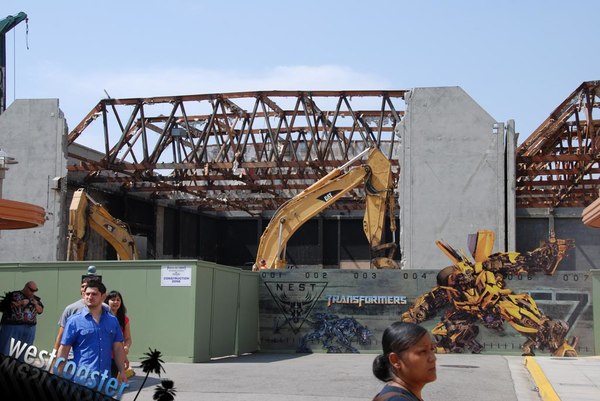 However, because it is a separate adventure it is "not dependent upon your experience in seeing the film."

Industrial Light & Magic (ILM) has been enlisted to contribute to the special effects for the ride, and Peter Cullen and others from the films have been hired. Variety does not specify which other actors have been cast.

The ride will cost an "significantly" more than the $40 million it took to construct Simpsons: The Ride.

Another version of the ride will be constructed at Universal Studios Singapore.

For the full article and additional details, hit up the Source link.