Transformers The Ride to Premiere at Universal Studios Singapore on December 3, 2011

Universal Studios Singapore has announced that Transformers The Ride will debut on December 3, 2011 with Transformers 3 Dark of the Moon Director Michael Bay hosting a launch party on December 2nd.

“I am very excited about the debut of this attraction at Universal Studios Singapore," said Mr. Bay. The ride was extensively detailed at New York Comic Con 2011, which will put riders into the boots of new recruits and go on an adventure with Evac, a character designed exclusively for the ride.

Watch: Trailer and Introduction from Universal Studios
Read about the Ride: SDCC 2011 Preview | NYCC 2011 Preview
View: Images of Evac and the Ride
Hasbro, Inc. will also release Evac as a figure at a later date.

The ride will debut at Universal Studios Hollywood in Spring 2012.

A toy version of Evac will be released in 2012 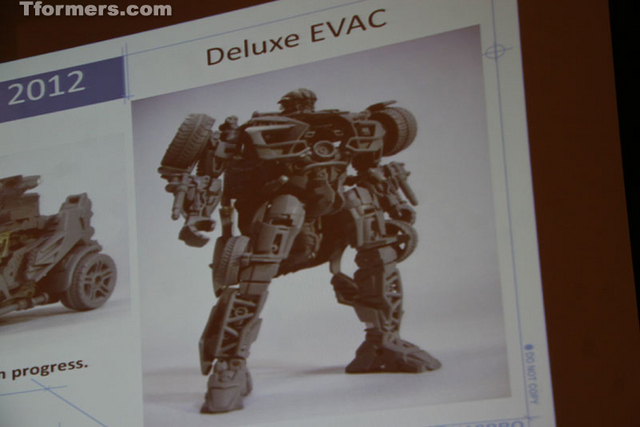 TRANSFORMERS The Ride will celebrate its world premiere at an exclusive evening event on 2 December. Michael Bay, director and executive producer of the immensely popular TRANSFORMERS blockbuster movies who also served as the attraction’s creative consultant, will be in attendance to help commemorate the occasion.

Mr. Michael Bay said: “I am very excited about the debut of this attraction at Universal Studios Singapore. Finally, TRANSFORMERS fans will not only have the chance to watch the AUTOBOTS battle the DECEPTICONS on screen; they will actually be part of the action. ”

The breakthrough attraction will feature 12 scenes, comprising sets blended seamlessly with hyper-realistic 3-D digital media and special effects to bring tactile realism to every moment. Guests will be unable to discern illusion from reality as they get transported onboard advanced motion-based ride vehicles into the TRANSFORMERS universe, and partake in the ultimate 3D battle against the DECEPTICONS right alongside the AUTOBOTS.

Enlisted as NEST recruits, guests are tasked to help the AUTOBOTS protect a remaining shard of the ALLSPARK – a powerful energy cube that gives life to the TRANSFORMERS. As the DECEPTICONS attack the facility in a bid to obtain the shard, guests will be introduced to a new AUTOBOT – EVAC – created exclusively for the ride.

New to the AUTOBOTS family, EVAC is a stealth transportation AUTOBOT stationed on Earth designed to transport personnel and classified materials at hyper speeds. For the ride, park guests will board EVAC and begin the ride of their lives, zipping through subway tunnels, down city streets and across rooftops, with the DECEPTICONS hot on their heels. Park guests, especially fans of TRANSFORMERS, will be thrilled as they come face-to-face – and be transported – by an AUTOBOT. This epic ride experience will allow guests the opportunity to truly “Ride The Movies™”.

Special year-end holiday packages for Universal Studios Singapore will be rolled out through the Resorts World Sentosa website and authorized travel agents. Guests signing up for these special packages will receive a TRANSFORMERS The Ride commemorative souvenir and express entry to the attraction. More details will be available at www.rwsentosa.com.