Toy Fair 2012 - Hasbro Cancels Transformers Dark of the Movie Figures for the USA, Canada and Asia to Finish Out the Series 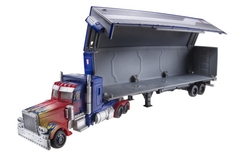 There's been rumors swirling that the rest of the Transformers Dark of the Moon action figures series announced for 2012 at San Diego Comic Con and New York Comic Con could be cancelled in the USA.

Hasbro announced during the Media Event on Saturday that Deluxes Bumblebee, Wheeljack, Ratchet, and Soundwave will only be available in these aforementioned areas.

Seibertron.com was able to independently confirm that other unreleased figures, including the Target exclusive Leadfoot and Twin Twist two-pack, and deluxe and Human Alliance Soundwave have been cancelled.

When asked why, Hasbro said it was due to lower demand and Asian and Canada, being smaller markets, could get away with smaller orders fulfillment of the product.

It is not known what plans Takara Tomy have for the series, but we expect they will continue with some releases as the Japanese market has many more outlets for collectibles than the USA.

There's a lot of speculation for why these figures have been cancelled. Surely, with three movies in a row, the new comers to the property have had their fill and moved on. More over, it is likely that Hasbro has simply over estimated the interest in their toys.

Equating movie ticket sales with toy sales has not panned out for the Rhode Island toy maker. With sales falling even on the same year Transformers Dark of the Moon took in over $1 Billion in ticket sales. The coffin was very likely nailed shut by Target, Wal Mart and other retailers who decided not to place large orders for the Dark of the Moon line this year.

Additionally, it has not helped that the Dark of the Moon series figures seemed to lack the momentum of the previous movie toys released. Many of the figures made fir DOTM didn't appear in the movie very long, if at all. Moreover, Hasbro reduced the size, articulation and paint applications on the figures while increasing prices nearly 50% in a just few years.

Even if the toys were great, Hasbro is competing with a world that is moving away from physical forms of entertainment like action figures for smart phones, online media and games. With kids as young as 5 moving to the digital world, the writing is on the wall for Hasbro's properties. Go virtual, or die!